Long day at work and heavy traffic, would not deter us from having a good laugh for the evening. Thanks to nuffnang, we treated to watch the animated comedy movie, Hotel Transylvania.

The movie has wide selection of characters from the horror classic. Namely Count Dracula (voiced by funnyman, Adam Sandler), an overprotective father who sets out great lengths to keep his daughter, Mavis (voiced by Selena Gomez) safe from any harm by the humans, Frankenstein (voiced by Kevin James) and wife, Eunice (voiced by Fran Drescher, and yes, she’s the Nanny that goes, Hello Mr. Sheffield), Murray “The Mummy” (voiced by none other than Cee Lo Green), Wayne “The Werewolf” (voiced by Steve Buscemi) and wife, Wanda (voiced by Molly Shannon) whom is keeping it together despite a whole troop of werewolf kids and many more others. 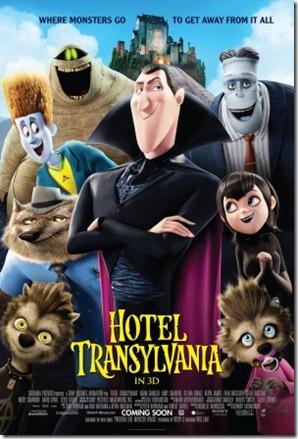 As the title suggested, Hotel Transylvania is a hotel that is specially caters to all various monster that came to existence. We have the gremlins, sand surfing mummy, a group of wolf packs, big foot, the undead, zombies and much more.

Anyway in conjunction of Mavis (Dracula’s Daughter) 118th Birthday, Dracula had invited all of the monster to celebrate the birthday but his world was about to be turned upside down as one of his charade to deter her daughter (Mavis) from venturing to the human world had brought the attention of a random travelling human named Jonathan (voiced by Andy Samberg) followed the bumbling zombies that Dracula engaged to play on the charade to make his daughter believe that the world out there, humans are bad and dangerous, back into the castle hotel which Dracula built ages ago and worked hard to starve off humans.

As turmoil and chaos soon ensues upon the arrival of Jonathan (The human) into the steps of the hotel which was declared human free till now. Worried that his ruse and charade might fall apart, Dracula had devised a plan to blend Jonathan in amongst the monster and as it turns out a major success. Everyone in the community likes him and Mavis is enchanted by his presence which signifies that she has a crush on him.

Is he really Uncle Frankie’s long lost cousin of the right hand? 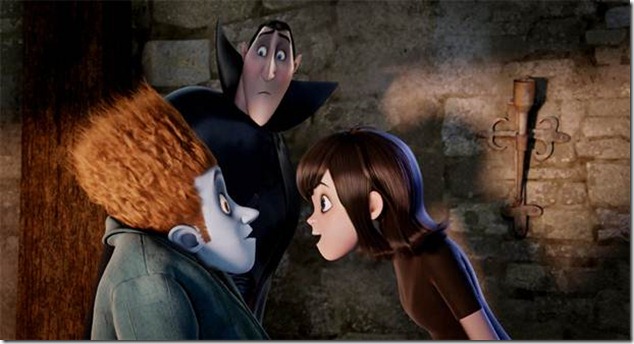 All hell breaks loose when Quasimodo (voiced by Jon Lovitz) and Esmeralda (Quasimodo’s pet mice) had sniffed out Jonathan’s human scent. Fearing for the worse, Dracula tried to kick Jonathan out where it had ultimately failed as he returned and throw an awesome birthday for Mavis.

Aha, I see zee smell of the human gel that holds the Stein’s hair 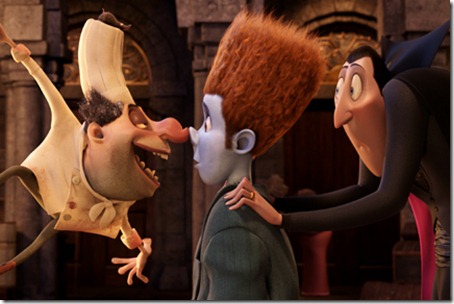 After some turbulent moments, Dracula would learn that the human world has change and cease to be the violent times where he once lived in. With courage and support from his monster buddies, Dracula set out to win back his daughter heart and also the whole community.

It’s alright, go on ahead… 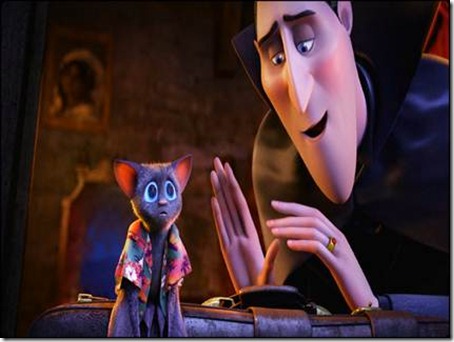 There would be moments that would tickle your funny bone silly. This movie has definitely mixed with humor and lots of laughter brought by Adam Sandler and the rest of the cast. The ending is pretty much predictable too though I have not reveal it here. Let’s see you could predict the ending of this story.

Overall, my rating would be 7/10 as there are several aspects in the movie which is considerably poor.

1.       While the monster announce that Dracula is among the crowd and would need help to go pass the them, they immediately oblige and made way for him to zoom off.

2.       Vampire is not supposed last under the sunlight but strangely, Dracula manage to fly off like a burning jet, chasing the commercial aircraft which is climbing altitude and subdue the pilot with mind control to convey his thoughts. (Darn he is tough!!)

3.       CG makes animation blend in well and smooth but bat with goo goo eyes, now that would be pushing it.

4.       Keen sense of smell to be able to identify where, when, how and what, while still remaining idle. (Though it would be awesome skill)

This movie is definitely suitable for viewing pleasure but unlikely for serious viewing as it would twist your brain into overdrive.

Coming to a cinema near you. chaos…