“ So I thought I write a short note to brief you guys so you guys won’t have too many question mark on what’s happening…. I actually plan this a month ahead, supposingly to throw him a surprise birthday dinner on Saturday night but I am worried he would have discover about it! So I choose weekday where he will be busy with his work and will never thought that I will throw him a surprise dinner… So on Thursday night I tricked him that I want to attend fashion show and would like him to be my plus one! So he said yes and there we go..Told him the venue is Whisky Bar which is beside SteakHouse ( hehehe I did some research on that area) So when we arrive I pull him to Steakhouse instead of Whisky Bar and he…… (to know the full story you shall read what Thomas has written below… and this is also a food review written by him! The steak is extremely appetizing…Bon Appetite!”

On the fateful day, we were supposed to have dinner when she prompt the question whether to head over for fashion show where we could grab something to eat whilst enjoying the show and figured why not, hence agreed to it immediately. As we were getting ready, she looked absolutely stunning in the dress and due to pressed for time, we had to make haste on the preparation to head out as we were behind schedule as the show is about to start, real soon. 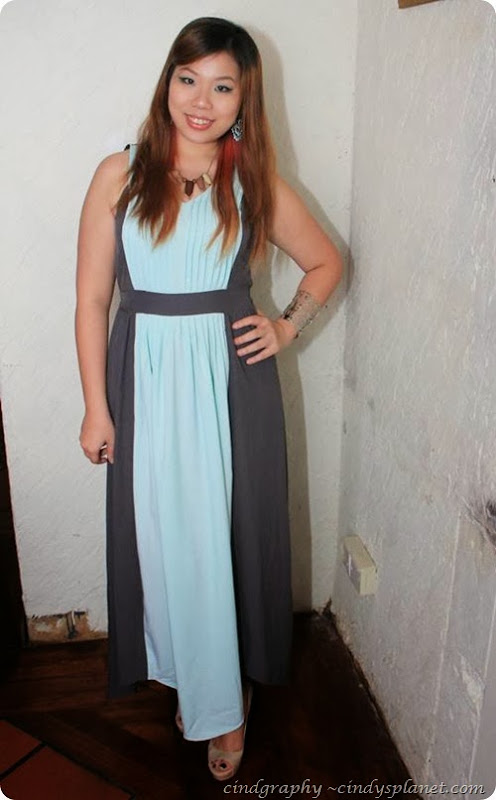 A smile of sunshine

After getting off and making our way towards the place, I was still under pretext of heading a fashion show which we quickly hurried to it and the next thing I know, was pulled to next door which looks every bit of exquisite taste along with the magnificent display of wine rack, right at the back of the place called “The Steakhouse”. It is located in the heart Changkat Bukit Bintang, resident of the pubs and bar. 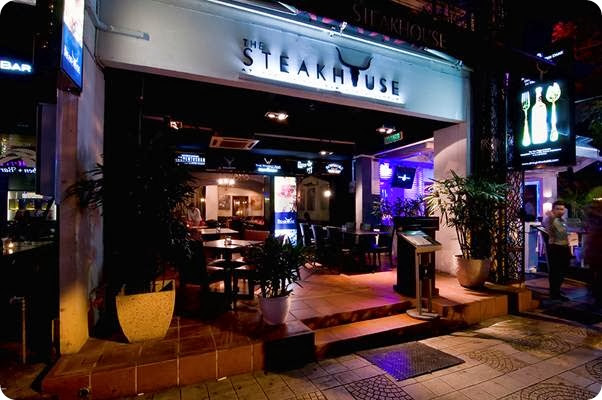 The Steakhouse
(Picture by foodnframe.com)

By then, I was shocked, startled and surprised which is very obvious on the facial expression that how she had meticulously planned it all and had managed to keep it eluded from being discover. It is a pleasant Birthday surprise celebration which is truly surprising to the very end. After being shown to the reserved table, we were not handed the menu for a good 10 minutes which found it a bit peculiar but didn’t give it much thinker and requested for the menu. After confirming the order, we indulge along with the wine and toast to a start of great evening together.

We start our evening with the soup order of the “ Wild Mushroom Soup ”. A common and simple serving of it, would tell otherwise as the soup neither too thick nor creamy, a blend mixture wild mushroom with the stunning embellishment a dash of truffle oil and chives made the aroma smells great. The taste is absolutely exquisite as the blend of the mushrooms infused with the soup and there are slices of mushroom which leaves room to chew. 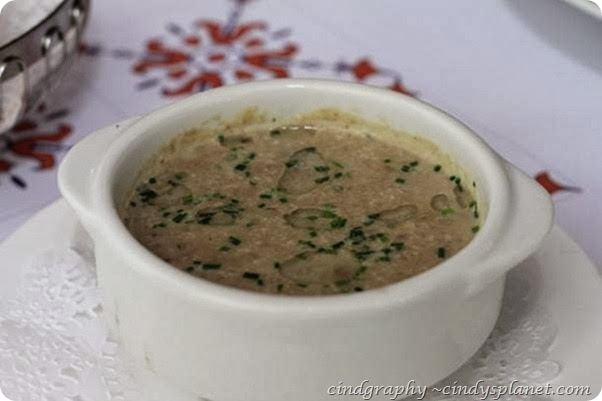 There is also a side serving of bread slice which unlike the regular loaf of bread but it has cranberries embedded and soft texture. It goes very well with the mushroom soup. We absolutely love to dip the aromatic bread into the soup and enjoy the combination of the taste. 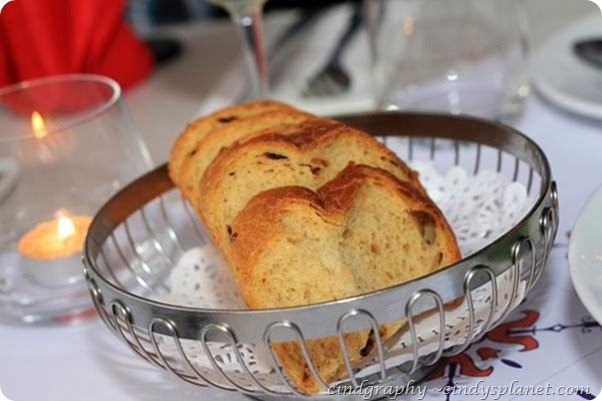 Next we have the “Arugula Salad ”. The “Arugula Salad” is surprisingly taste great and we love how they add pear slices which give a hint of sweetness to the salad as the Arugula have a slight bitter after taste and the pear complements the salad well. Though there is sprinkle of smoked cheese, we can’t taste the cheese. However the lime vinaigrette is tad light and the smoked turkey has a very similar taste with the chip that is quite savory. We enjoy the smoked turkey as it is thin and slightly crunchy due to the frying. Another element would be the tiny cherry tomato which balances the whole salad well with its bite size. 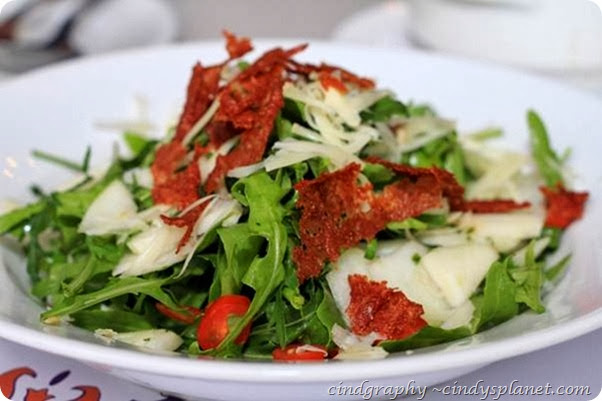 Being in the place where the name is derived from its specialty, we hopped on the chance to order the steak with high hope and anticipation runs high. The steak was served quite fast.

The steak is served on top of a bed of green and red capsicums with onions in between. Learning from Gordon Ramsay on steaks, had ordered it medium well. The texture is soft and the middle is pinkish whilst retaining its natural flavors & juices. The Australian beef was undoubtedly fresh and minimal marinating though its tad salty which could be attributed to the seasoning on the vegetables sides. The soft and slight crunch of the asparagus taste great, along with beef bacon roll that fulfills the palate evenly, along with meat’s juices.

(On a second note) Cindy:

The grain fed is slightly salty but would be just adequate if I may add. The tender texture of its meat with the thin crisp on the exterior is done exquisitely. A quick dip in the béarnaise sauce would tell it taste sweet with the slight sour after taste. Quite an adventurous taste I would put it. The béarnaise sauce shares some similarity with caramel in terms of taste. Tried the side condiment of garden salt and I love it. It gives a tangy saltiness and the salt is crispy. The onion salt on the other hand was too salty and the onion aromas were light though. 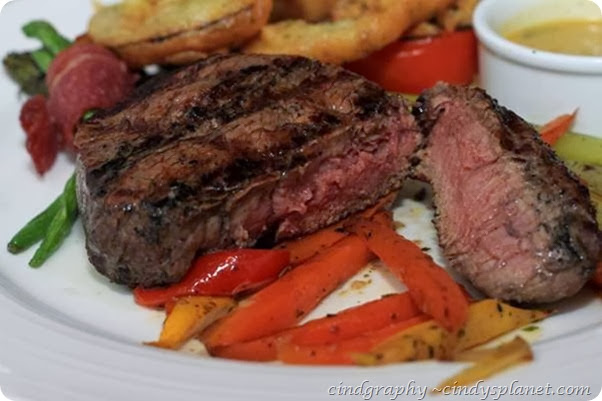 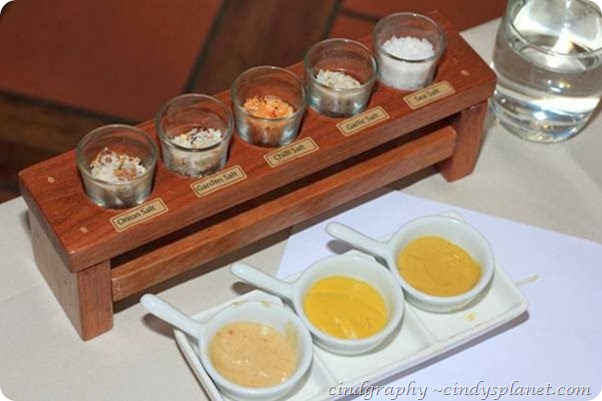 The meat is tender and soft in texture that is infused harmoniously with the slightly grilled on the exterior, giving it the slight crisp. The tender meat almost melts, given its cooked till medium well as wasn’t adventurous to try out medium rare and the red wine sauce is a great selection as it complements the meat. The sautéed vegetables are absolutely delish though the fried onion rings is slightly thick on the batter.

(On a second note) Cindy:

The crust on the Angus steak exterior is crispier and it’s not as fishy as the grain fed beef taste. The Angus meat density feels solid firm as to compare with grain fed meat which is less firm and felt albeit loose on the texture. The tantalizing softness from the meat is simply exquisite and being cooked medium well, the meat retains the natural flavor and the red wine sauce is a great addition to the taste as the strong aroma from the wine taste absolutely great that entices the palate. The sautéed carrot and asparagus is so delish but the onion ring is not crispy though very sweet. The sautéed mushroom is as normal. 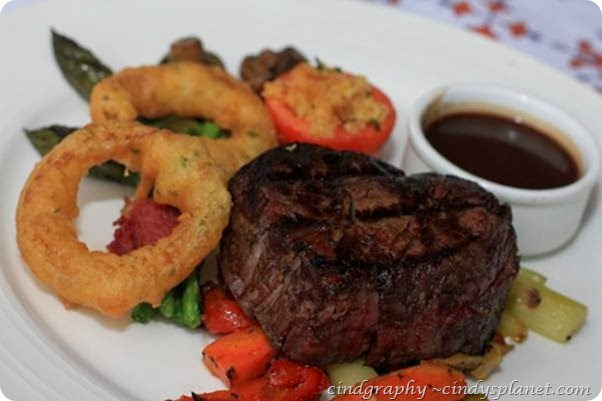 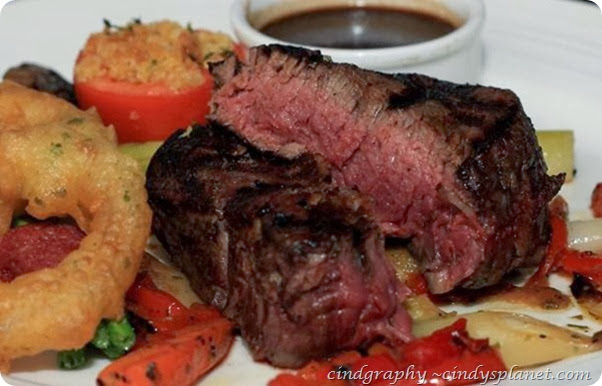 All steaks come with the preferred choice of potatoes (French Fries, Mashed or Sautéed) and the sauce ranges with several choices (Black pepper, B.B.Q, Red wine, Mushroom, béarnaise). We order the both mashed and sautéed. The mashed was a slight letdown as it was rather plain and lack of the buttery aroma though the sautéed was great as the sweet taste from the onions blends well the potatoes. 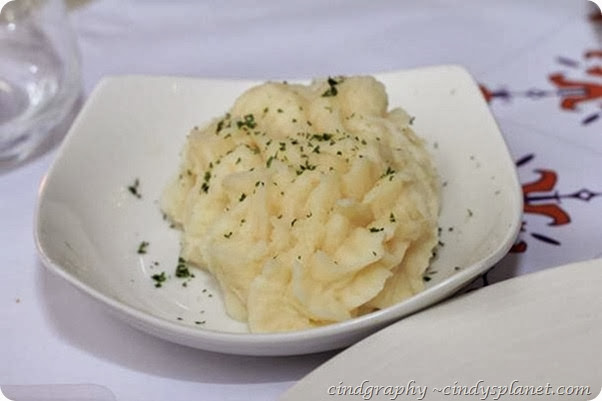 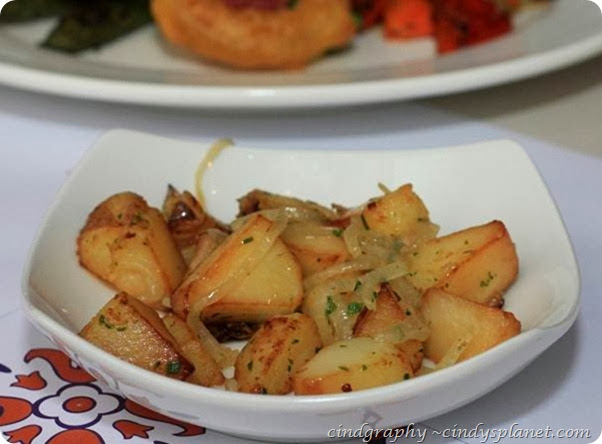 After such scrumptious meal, we were delighted to continue on with the dessert serving which comes with orders of the steak. Since there were 2 orders of steak, we were allowed to order 2 desserts which are set to tantalize the taste buds.

The rich white chocolate taste spreads evenly in every scoop onto the spoon which fulfills the palate though its tad sweet. 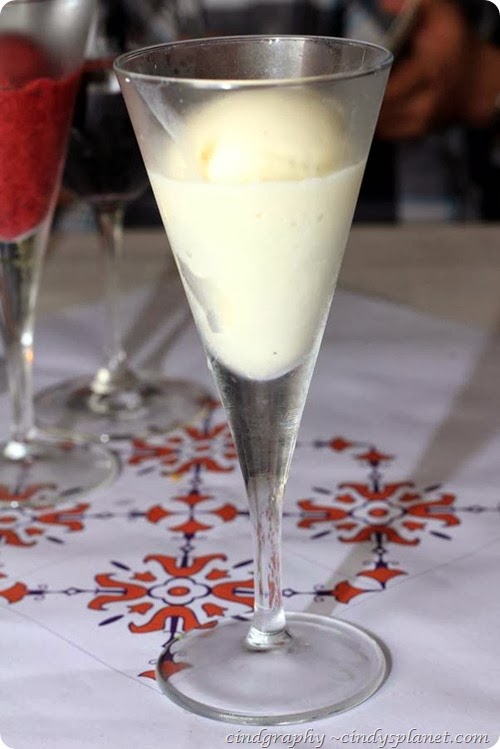 
The rich and fruity taste from the raspberry is evident as the sourish taste derived from the natural blend in the sorbet; ensuring raspberry lovers get the full flavor of the serving. 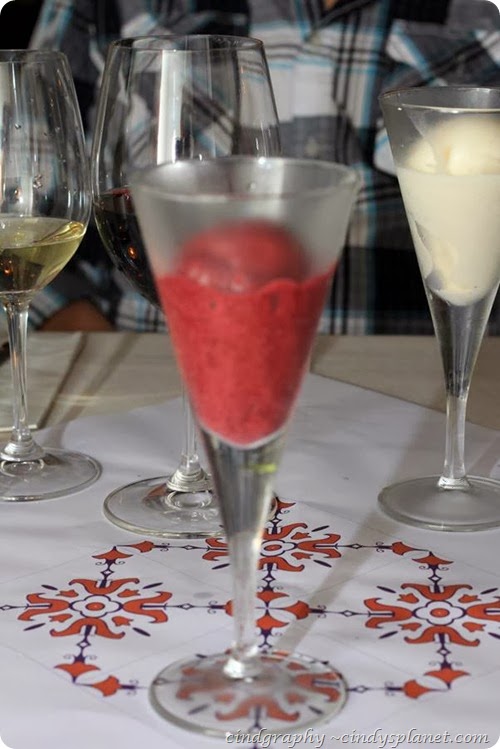 The next dessert comes as another surprise which comes along with the birthday song. As they were singing away, made a wish and hope that this moment of bliss would never end which all made possible by my beloved that had put in so much effort to ensure the evening was a memorable one though there were an incident which we’ll get to it in another time.

“ When we were indulging in our steak, suddenly we hear the staff singing birthday song, I thought shit my plan failed why the cake came so early!! Then we realized it’s for next table and I told Thomas no I did not order any cake for him…evil grins!! Then when we about to finish our ice cream, the bday cake still not yet presented…I thought the staff must have forget about it since I only inform them when I make my reservation and I did not remind them on the day itself!!! BUT they remember and thats when Thomas was surprised for second time and he asked “ you told me there is no birthday cake??” me?? evil laugh!!! ” 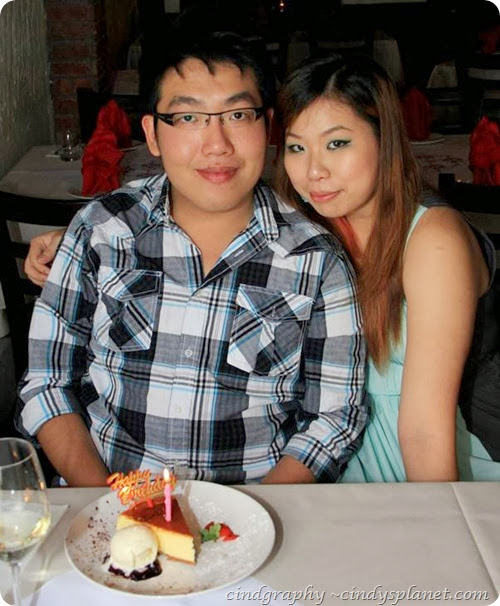 We were served with the complimentary cheese cake which is very cheesy and the bottom comprises of nuts with cookie base. The cheese cake inside have traces of raisins in it. On the side, there is vanilla ice cream on top of the blue berry which tastes really good. 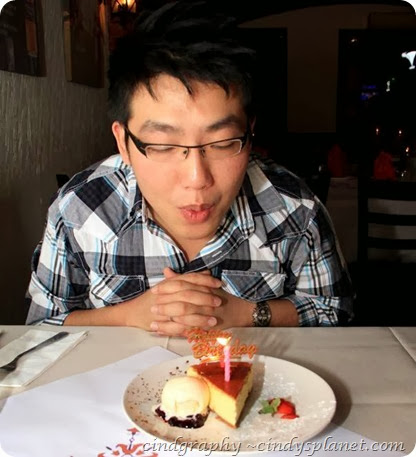 Made a wish (In pic – Cheese Cake)

The evening is filled with moments of bliss and exquisite taste as we indulge the wine with the soothing ambience. For your information, you can get free flow wine for RM 50 per pax! 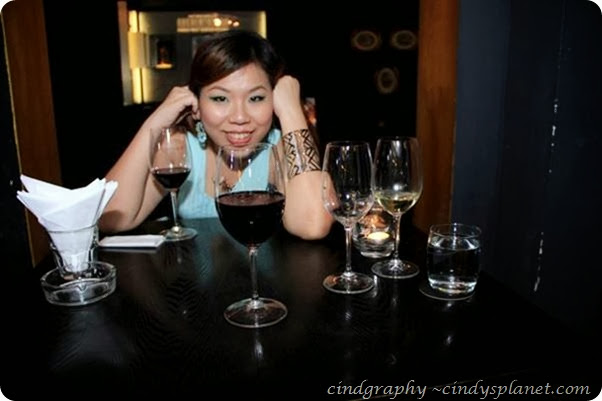 We concluded the evening by wrapping up the glasses of wines which they were about to close, given the time that passes so quickly when we’re enjoying. 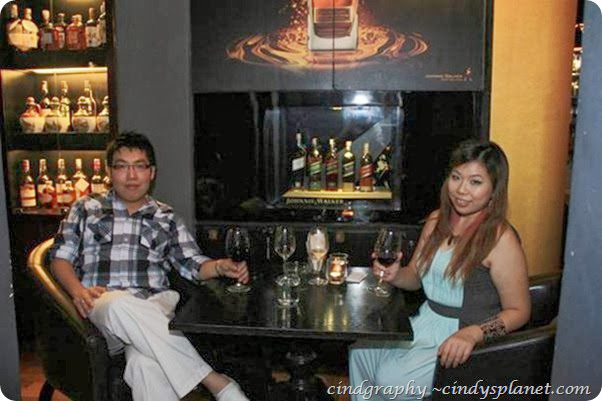 Toast to a great evening.

All this is made possible from the meticulous planning, and the effort put in by one person that would always cherish from now till ever. Those moments captured and etched into the heart, in memories that draws vividly in bliss and happiness which linger for as long as breath shall remain. 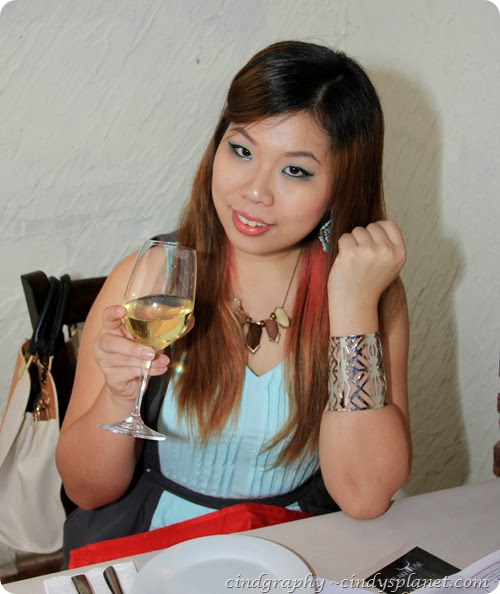 Thank you, my love.

For the month of November SteakHouse KL is having 50% of for AMEX credit card holder and complimentary ice cream for any steak order. If you are AMEX card owner do not missed out this great deal!! 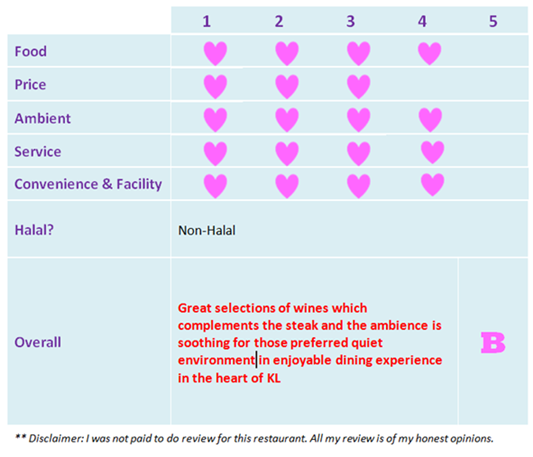 How to Look and Feel Good in Lockdown