In the bright of day with the sunny skies and fluffy clouds on a Sunday morning is a great start for rest of the day. Thanks to Foodirector, we head on over to the Journey Cafe which is situated in Setia Walk, Puchong. 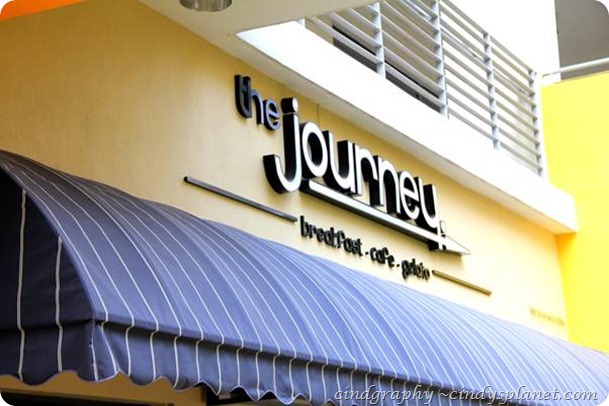 The pleasant environment and simplicity of its theme is notable, given the general idea is a cafe which also serves as a hangout spot for many. The open spacing arrangement compliments the overall theme which helps to avoid during peak periods. 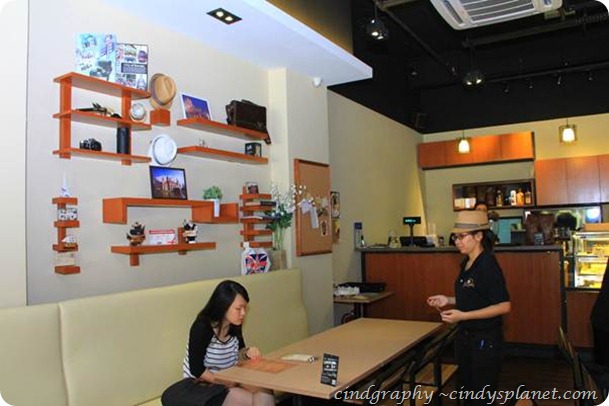 The collection of travel books contribute to its decor which gives the patrons a glimpse of travel. The slightly dimmed lit lamp illuminates the soft ambience which complements its environment. 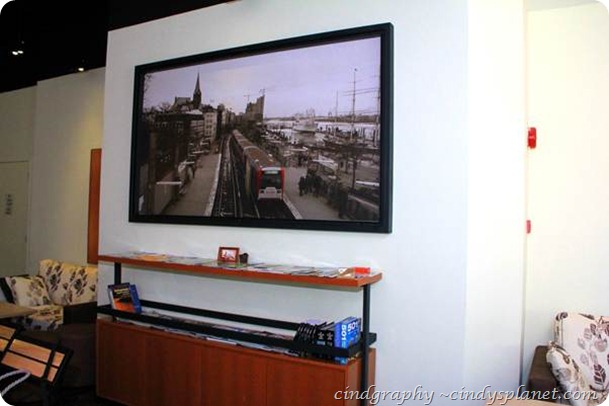 Over at the corner from the entrance, spots a cosy corner which is great for a small gathering for friends over a cuppa of coffee or just hanging out. 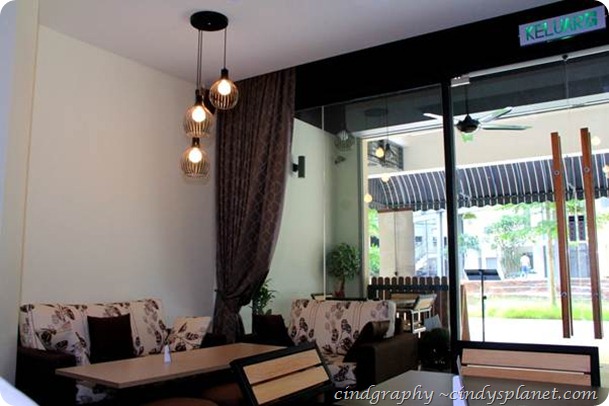 After getting the orders taken, we patiently await the order to arrive which to our astonishment came rather quickly.

We start off with the first item which is the “ Shrimp Bruschetta ”. The fresh prawns are served on the bruschetta with the lettuce on the base and mixed onions with tomatoes. The blend between the union of tomato and onion complements the prawn well while the additional moisture on the former drawn from it, gives the refreshing taste without compromising the bruschetta which often left soggy from juice. 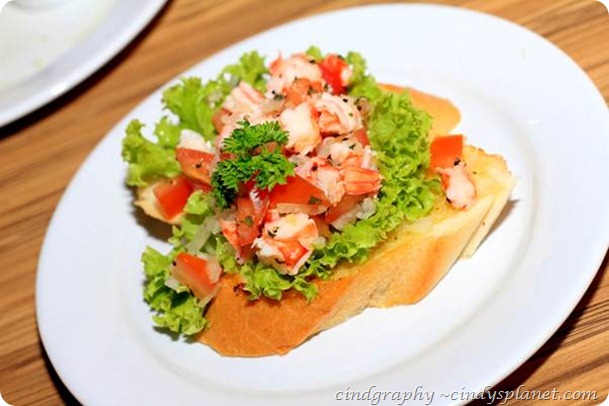 Next up, we have the “ Grilled Chicken Salad ”. The salad is served with the salad dressing and topped with grilled chicken. The light dressing on the salad is just right on the ratio which gives it some flavour without the excessive taste and the tender texture on the grilled chicken is surprising as the grilling on the chicken surface is adequate to give the slight grilled taste to go with the salad. 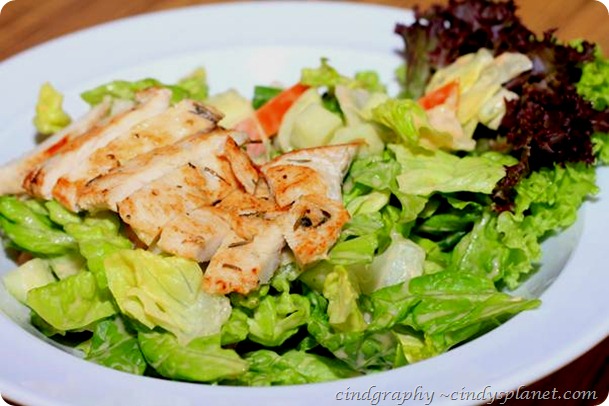 Serving up is the “ Fried Button Mushroom ”. The bright yellow hue on its exterior attracts attention however the frying and the light batter had left the button mushroom dry and it went rather bland on taste. The side serving of mayonnaise helped for a quick dip of taste. 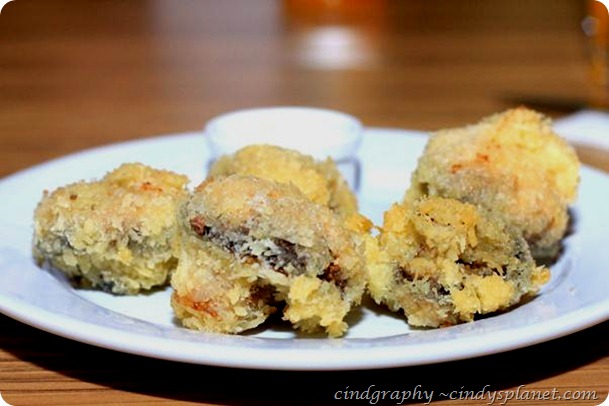 Following on is the “ Swedish Meatballs with Fries ”. The initial glance would leave many to wonder whether it’s dipped in chocolate sauce or something as the dark brown looking meatballs would poised many question on the texture and taste. The taste wasn’t in expectation as the rough texture and lack of moisture in the meat would suggest it was over fried. The brown sauce didn’t helped much either to complement its taste. 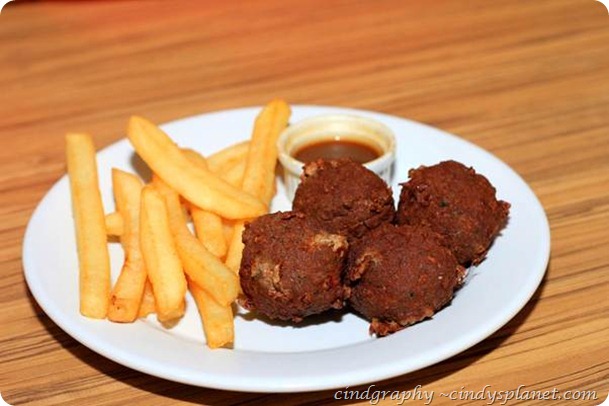 Serving next is the “ European Continentals ” which is a platter of delight. It comprises of Laugenbroetchen roll, sunny side/scramble egg, beef bacon, chicken sausage, and sautéed mushroom. The sautéed mushroom is rather bland whilst the sunny side up is overcooked, leaving no runny egg. The scrambled egg wasn’t buttery at all. The baked bean is very huge which is nice though the bacon was too oily and wasn’t crispy. Subsequently the sausage tasted more towards flour than the permitted taste. 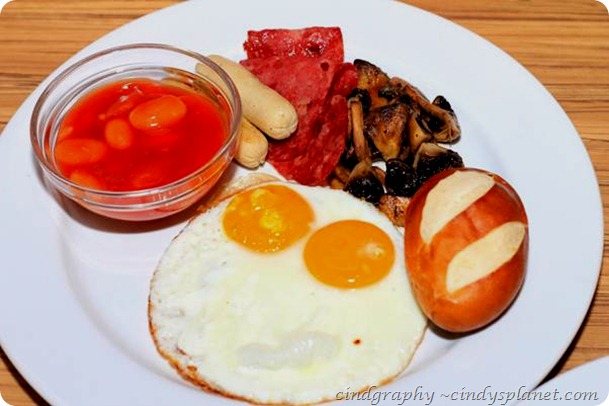 Going for next is the “ Smoked Salmon Sandwich ”. The smoked salmon is placed onto the baguette with the poached egg in middle which sees the open type sandwich. The baguette was slightly drenched in butter and not crunchy on the exterior crust. The poached egg is rather nice and the Smoked salmon is surprisingly smooth with its natural flavour. Though there is a serving of sauce on the side, the taste from the salmon’s natural juice with the lettuce and the poached egg’s compliments the overall flavour. 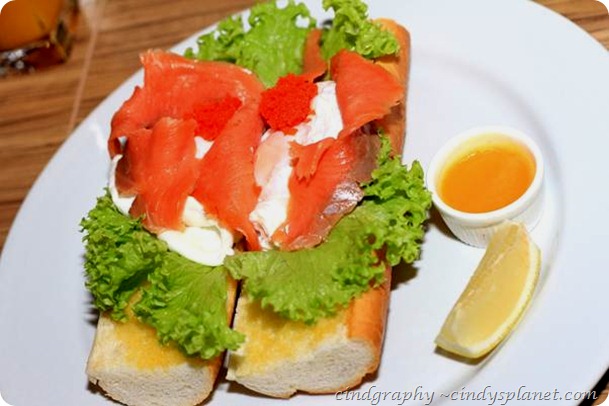 Next we have the “ Softshell Crab Spaghetti ”. The spaghetti was tad dry and a dash of chilli flakes gives it the spicy taste though the use of cherry tomatoes to balance the flavour. The crab is rather oily which wasn’t appealing. 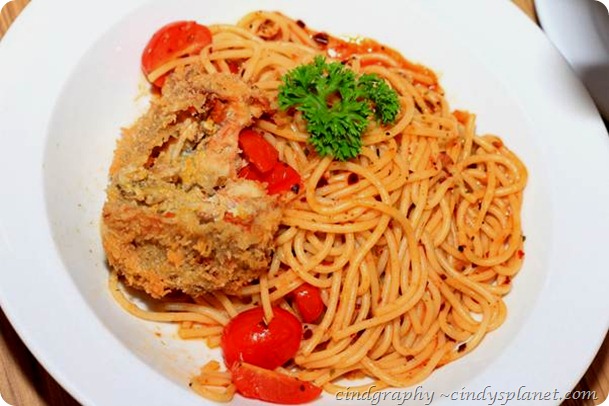 Calling Garfield for the next serving, is the “ Lasagna ”. The thick layers with the cheese in between sure stirred up some appetite. On the initial bite, find that the texture was good and i like the application of sour cream right on top which gives a distinctive taste with comparison in general but the food was simmered down and cold when we started to eat, hence it would be difficult to judge besides with assumption that maybe if it still hot, the taste might be much better. Even so, the texture is quite creamy and cheesy. 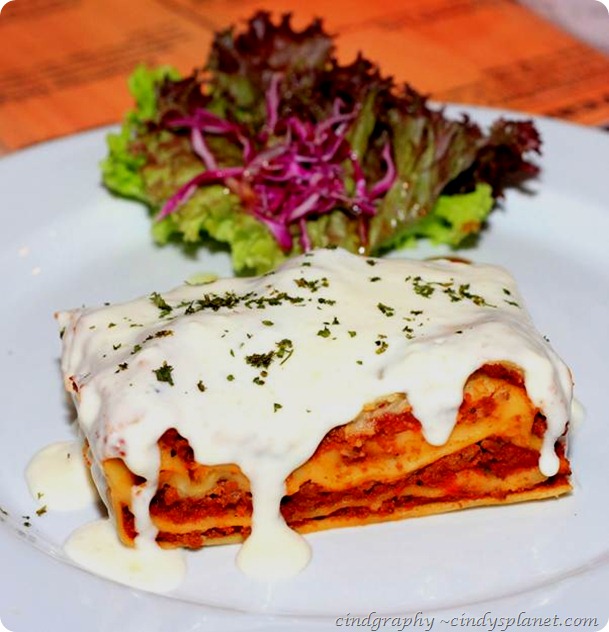 Beefing up next is the “ Juicy Beef Burger ”. Comprised of the serving with fries, the burger patty was too dry as the texture is rough and lack of the natural juice with tad salty on flavour. The bun was hard. Perhaps going easy on the patty, might give it more flavour. 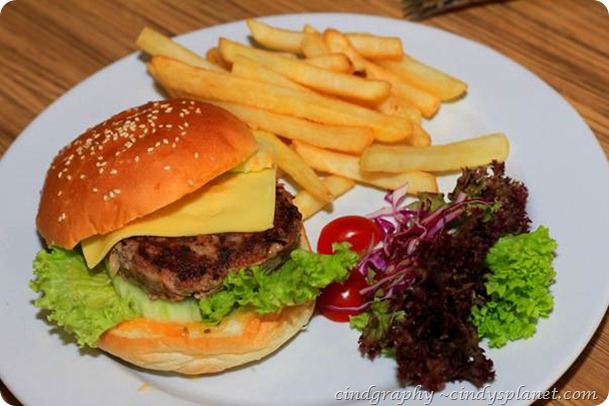 Serving next is the “ Aglio Olio with Shrimp ”. The fiery coloured looking spaghetti had certainly caught us off guard as the fresh and big looking prawns with the chilli flakes mixed tomatoes sent out mixed taste. The mushroom was sliced thin to give every bite a taste that infuses the taste from the ingredients. The spaghetti is tangy and taste is balanced though it’s slightly dry and oily. 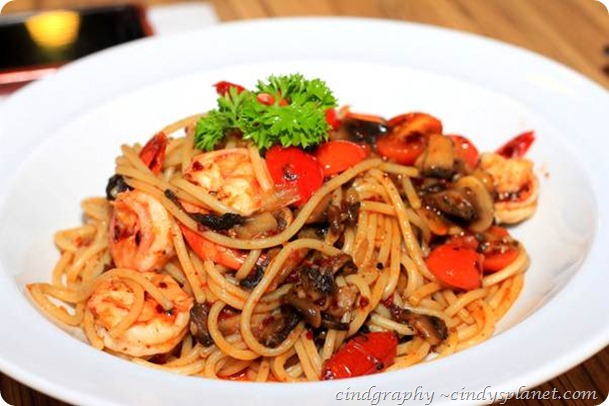 And the list goes on next; we have the “ Spaghetti Carbonara ”. The sauce wasn’t creamy but with bites of onion is good, given it slightly more flavour rather than the former. The mushroom pieces is added for more texture to it along with chicken chunks. 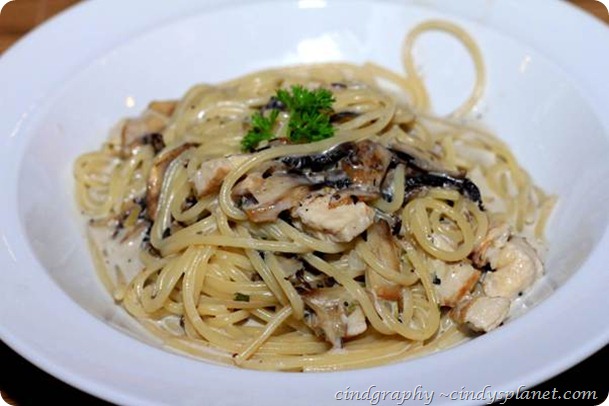 The next serving is rather different from the others as serving next is “ Salmon Spaghetti (Replace with Chicken) ”. The serving was originally intended to be served with Salmon however got replaced with chicken. Even so, it fared well as the texture was creamy and the spaghetti was al dente which was great. The chickens were a bit chunky which the taste didn’t season well with it. 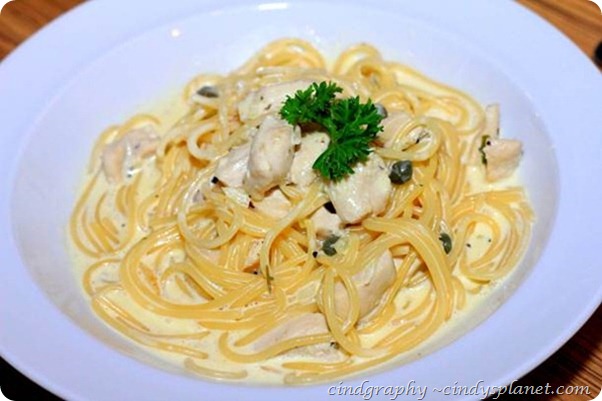 Following we have something meatier, “ NZ Lamb Grilled with Mint Yoghurt Sauce ”. The lamb texture is found to be tender and soft which prolly due to its thickness just right to be grilled and allow the taste infused with the meat while the mint yoghurt sauce gives the balance and compliments the lamb. Whilst the lamb juice is notable, the mint in the yoghurt is more prominent and unique by its own though the colour isn’t all that appealing. 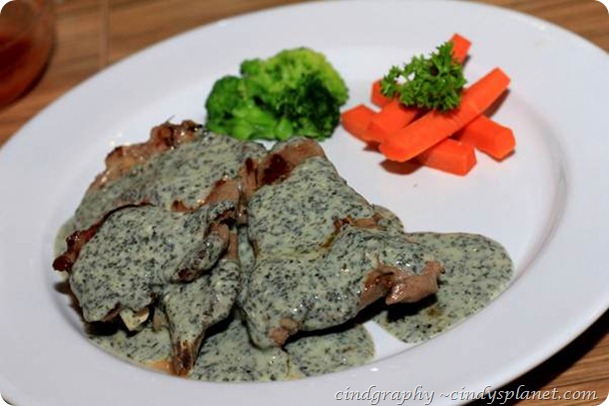 Next is the “ Tenderloin Steak with Garlic Sauce ”. The usual association with garlic could leave a distasteful result however for this serving, the taste is awesome and great as the garlic taste is balanced with the herbs and slight buttery to put on to the meat. The red bloody meat just grill to perfection which attribute to its soft texture on the meat and the flavour is right. The urging for a glass of 97 cabernet sauvignon to compliment the dish is reaching out for this meal. 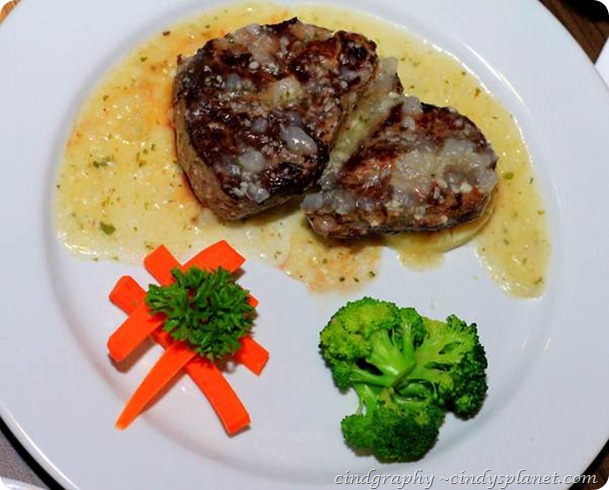 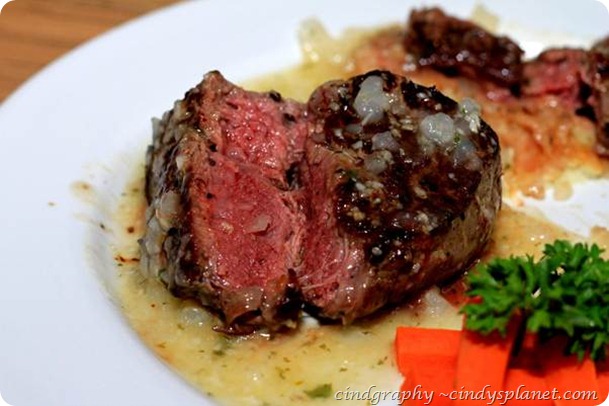 The meat inside (Medium)

Headed to open sea next is the “ Norwegian Salmon Steak with Creamy Sauce ”. The salmon slice is seen quite thick and the natural salmon taste is evident during the initial bite which the sweet and savoury juice drawn from its juice. The sauce was rather bland which could make do without. 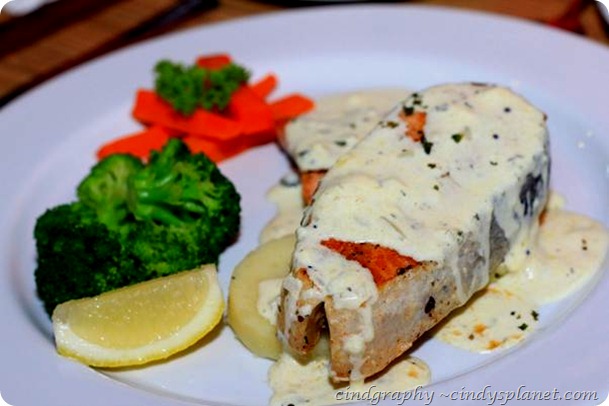 Next serving is the “ Australian Lamb Shank ”. Available on seasonal, the lamb shank is very flavourful and the meat is tender and chewy though I would love it to be slightly softer. The sauce is just right with the meat whilst reminds of some bolognaise sauce. 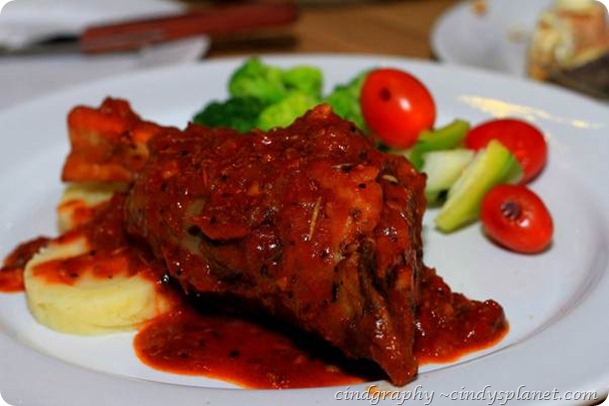 Imagined stuffing so heavier into the chute and yet there is always room for desserts. Diet plans are scrapped with the next servings of dessert delights.

We start with the “ Carrot Walnut ”. The cream is very buttery with a hint of sour flavour. It helps to balance out the sweetness of the cake with cinnamon flavour. However the cinnamon had overpowered the intended carrot flavour. 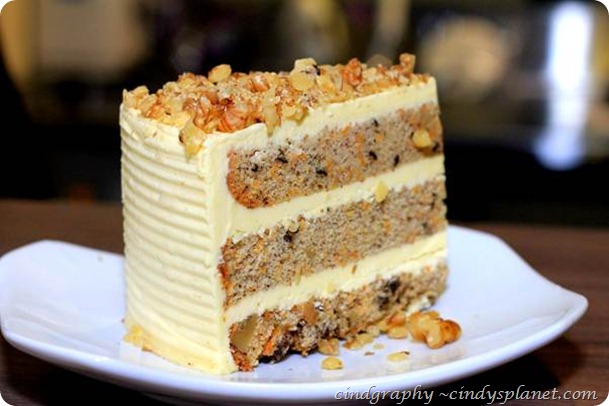 Next is the “ Raspberry Snow ”. The blend of almond and cheese mousse is unique and the texture is very soft however the combinations tastes similar like medicine. It wasn’t appealing for me as the taste had fallen of the appetite. 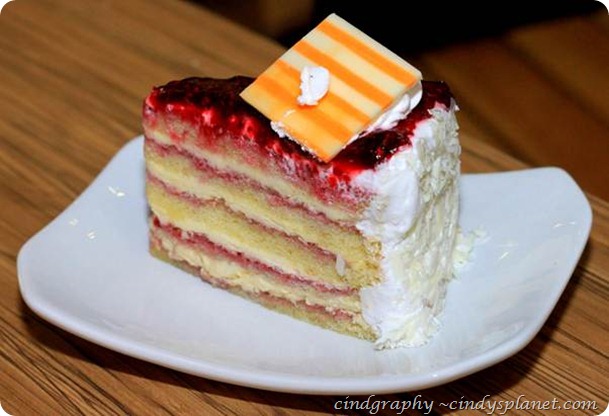 The next dessert would definitely by one of my personal favourite, “ New York Cheese ”. Being one of the house specialties, the cake had displayed a modest appearance for delightful surprise. The creamy cheese aroma is irresistibly good as the flavour of cheese was strong yet fresh and soft with a tinge of zesty lemon. The cookie base is so crunchy and had these tiny bits of salty kick to it.

Following we have the “ Red Velvet ”. The thick cream envelops the exterior of the cake while the inner layered with multiple layer of cream with the spongy velvet cake. The texture is slightly rough but the flavour is alright. 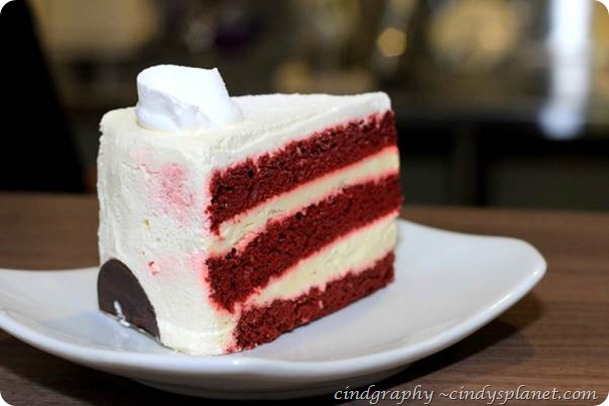 For chocolate lovers out there, this “ American Choc Fudge ” would satisfy the craving and get those daily fix of Chocolate. The texture is thick and rich with chocolate which is amazing. This cake is truly a sinful indulgence with heavenly delights. 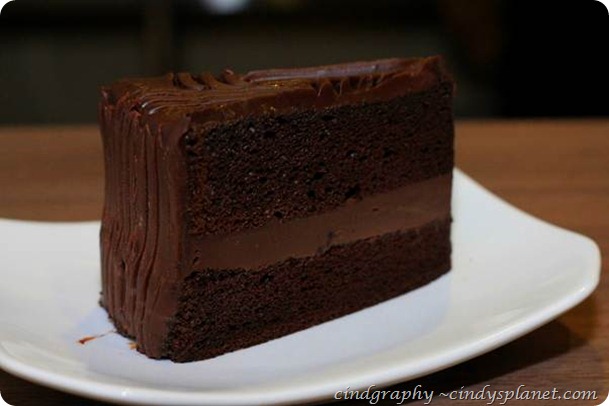 Next serving of desserts are those gelatos which varies in taste, accordance to different preferences.

We start with the “ Macadamia ”. The texture is very nice with the nut spread evenly is every bite. 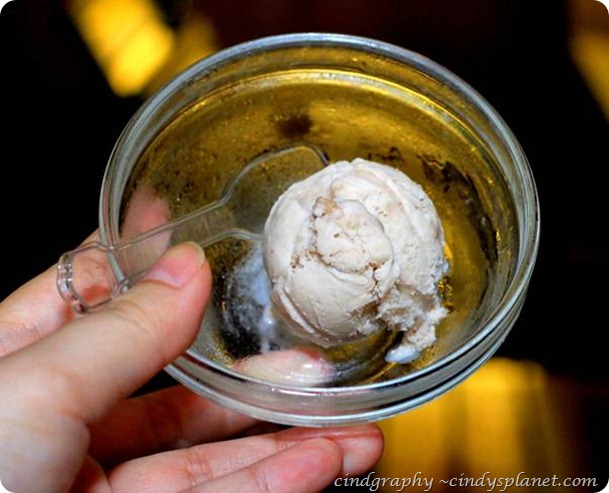 Next is the “ Green Tea ”. This wasn’t appealing as the taste is too strong which is turn off for many and doesn’t share the resemblance to its Japanese counterpart in terms of flavour though different type. 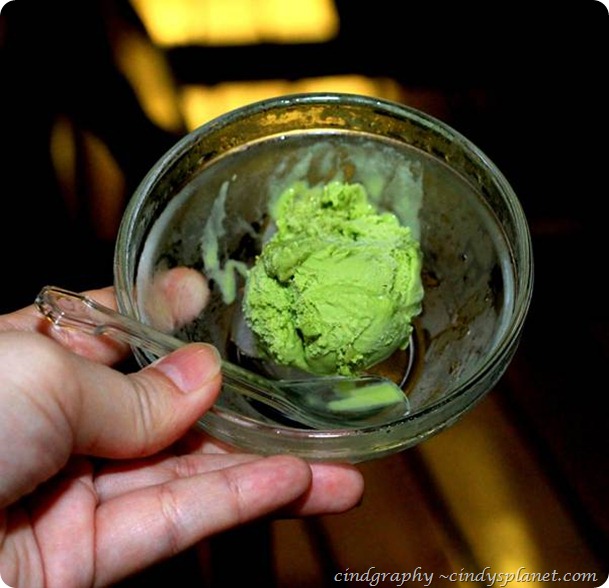 With the king of fruits in tow, expectation was high as the next serving is the “ Durian ”. The Durian taste like frozen and the intended taste had dissipated, leaving a rather bland of taste. 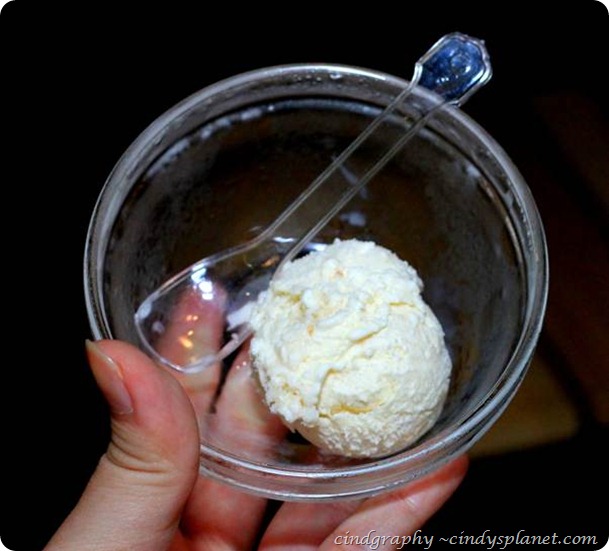 With many selections of Gelatos, the taste is rather below average as it might difficult to accommodate to different preferential taste. 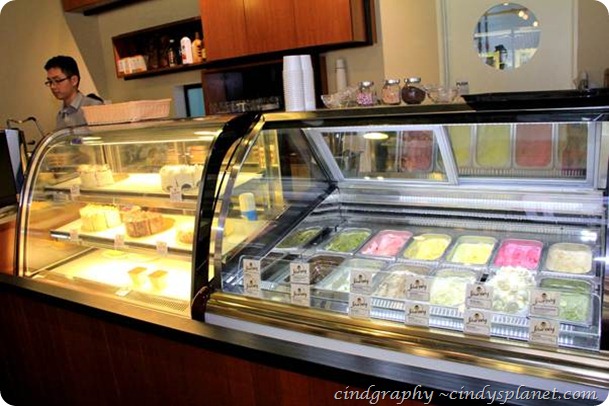 We concluded our course with the serving of gelatos and going easy for some feedback. Some interesting feedbacks were given and there is definite room for growth towards improvement which would be a great thing. Thanks to Foodirector and The Journey Cafe for having us that day to indulge in a delightful Sunday gastronomy indulgence. 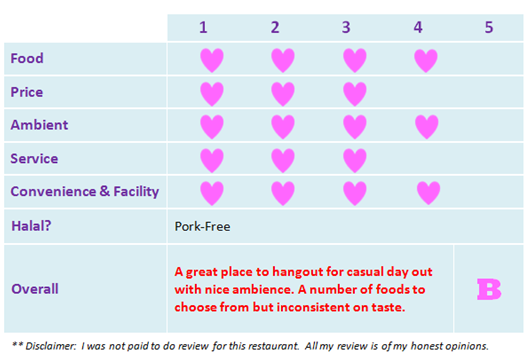 Hotels Now and Then: A History of The Hotel Business