Serenading in the night of endless medley of jazz to soothe the casual evening, we hopped on to visit the place. Thanks to Nuffnang’s TasteBuddies, we went to The Moon Bar. Located at the first corner of the row on the entrance of the, Jalan Medan Setia 2, The Moon Bar would be visible to any passerby which is strategic at one point of the juncture. 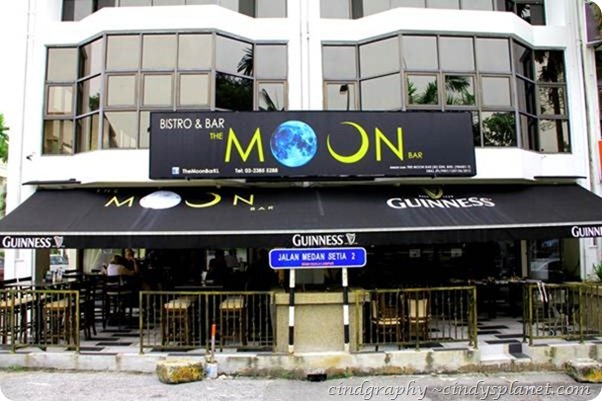 Right in the centre road sign for easy reference.

We were graced by the presence of Mike Tham whom is the owner of the place. He had further elaborate how the place came about 10 months ago prior to its soft launch which officially opened in October 24, 2012. Derived from the wife’s name Chand which in Sanskrit for Moon that gave the place its name, Mike also further explains that his wife cooks for a small private gathering which gave the idea for the place but Mike is more of a corporate guy which is why the bar came about. Generally the bar comprises of both the dining area and the casual bar area. 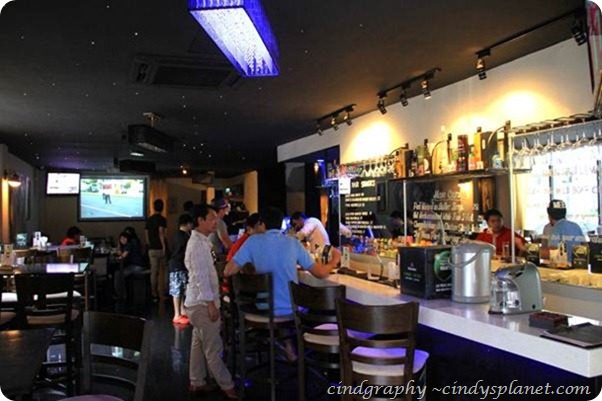 Patrons that come for drinks and dining would be in treat by performance by the live jazz band, David Gomes Trio. David Gomes is a prolific veteran jazz pianist that has been performing outside of Malaysia and effortlessly enthral audiences with his fabulous demonstration of jazzy favourites, light and easy tunes, and sentimental numbers. We heard the live set during the brief by Mike which is soothing and delightful entertaining with strong vocal performances by the lead singer. 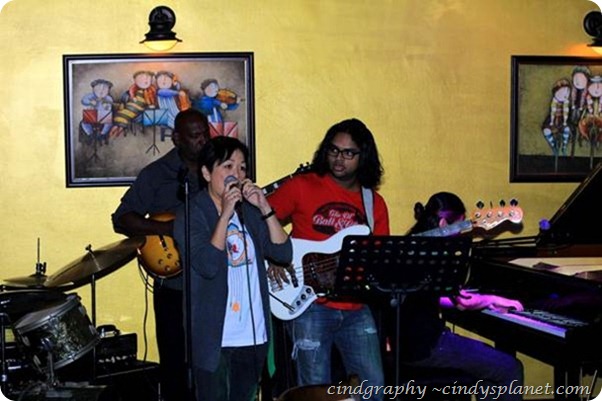 Is she alright? Need a wipe?

Patrons are seen enthralled by the performance which had captivated the surrounding audience alike. 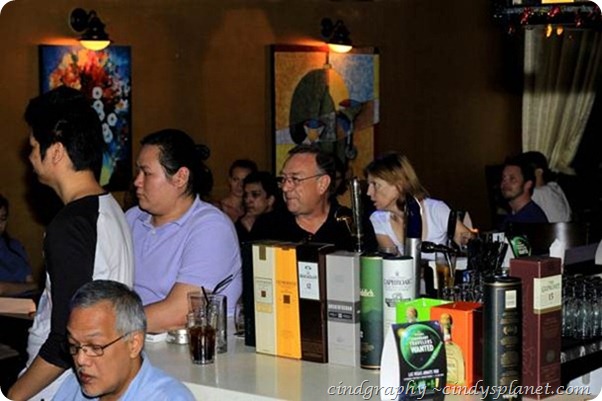 We start with an entrée which has variance in taste that entices the taste buds.
Serving on the platter is the “Black Pepper Lamb Parcel” which resembles the Chinese cuisine’s treasure sack. The parcel / sack comprise of mince Lamb meat which then seasoned with some spices and wrapped in the sack. It has a slight mild pepper taste and tad dry on lamb.

The second item on the platter is the “Roast Pork Belly”. Served of a skewer stick, the smell emitted by the roasted pork is strong and the roast flavour infused well with the meat whilst still soft in texture.

The platter comes with the serving of chilli and mint sauce for dipping. 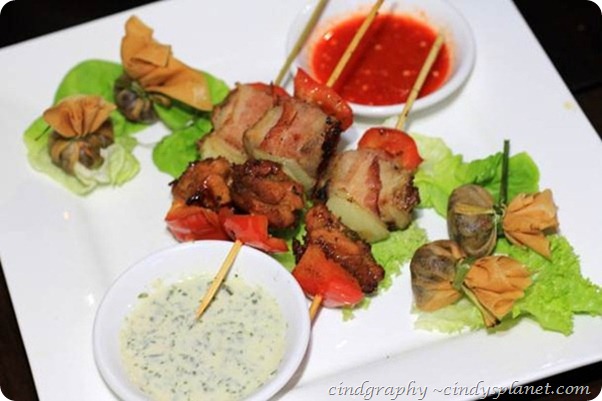 Next up, we have the “Hokkien Mee”. Mike gave the history behind this hokkien mee as patrons that come for drinks usually look for some light meals to munch during drinking and they would often call for him to get them which gave him the idea to cook up a scrumptious hokkien mee without the hassle of travelling here and there for one. He had sent his chef to study a few of his favourite hokkien mee joints prior of whipping out his hokkien mee serving. The result, the evident strong wok charred infused taste that gives it character with pork lard which gave it additional taste and the dark soy sauce mixed with tangy thick yellow noodle that gives the bite with delight of taste. 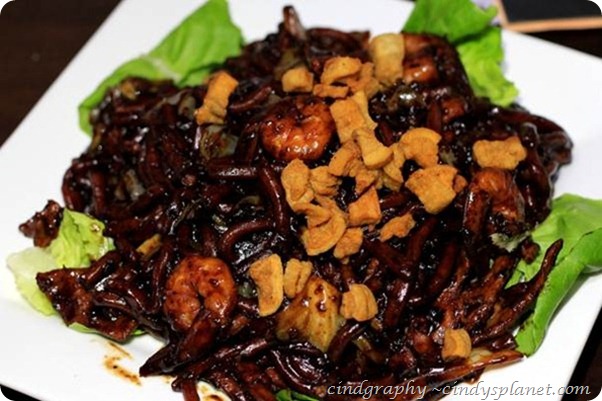 Following the string of drinking binge, the “Bak Kut Teh” is served next on the list which had surprised us too. Serving it hot, the strong herb aroma is evident which entices the taste bud to get a taste of its full flavour. The taste is infused with all the herbs though it lacks some garlic to give it the full proportional taste of the Bak Kut Teh. It comprise of straw mushroom, taufu, pork meat and lettuce. The pork meat is soft in texture and the broth is somewhat comparable with the prominent joints for Bak Kut Teh. 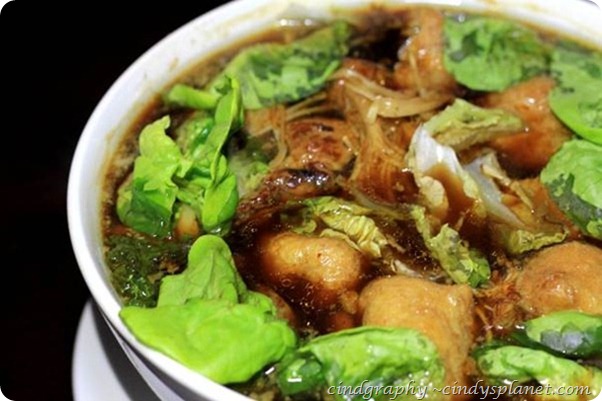 The next serving is the “Wild Boar Curry”. It is said that they hunt the wild boar from the forest which is then cleaned and served on the platter. The strong curry aroma emitted from it. On a bite, it’s rather spicy and the various spice with herbs in the curry taste infused with the meat which spreads out evenly. The soft meat texture is evident and befitting as no tenderizer was put. 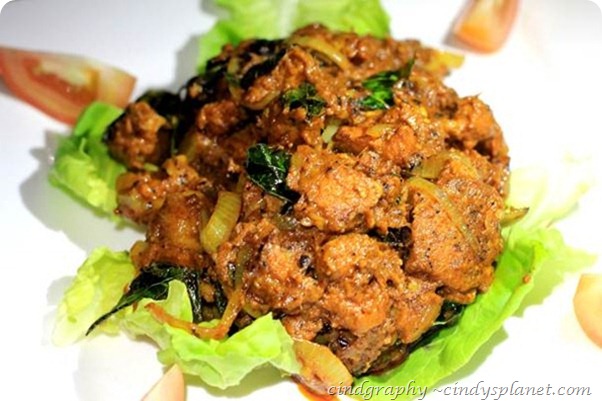 Next up we have the “Spicy Sri Lankan Pork Varuval”. The dark looking dish had certainly startled me but befooled not by its dry type appearance as the unique spicy infused spices had definitely entice the palate. The tender pork texture goes well with the heavily mixed spice which helps to soften the fishy taste caused by the oxidation of the fat. 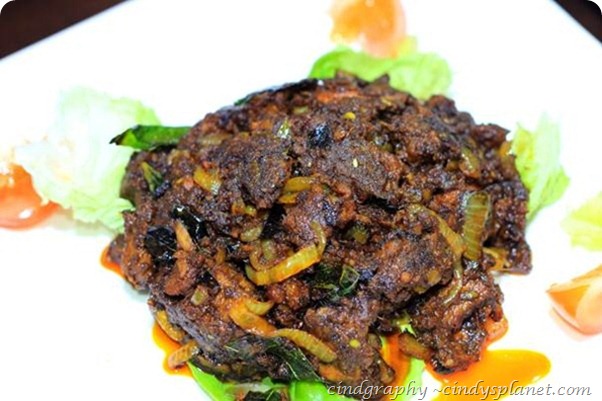 In the midst of the meals, we were in treat of some of their cocktail which concocted by the bartender over there that spots some rather unique blend of taste. It was also mentioned that their cocktails uses freshly cut fruits to ensure the taste is not compromised.

Serving the opened up coconut is the “Coco Nutz”. This tropical looking cocktail is a combination of Malibu, Vodka, Condensed milk, Fresh Yoghurt, nata de coco and coconut cream. The blend of taste with the Malibu and the smoothness from the mixed of the milk, cream and yoghurt, had certainly balanced the taste which would appeal to some that wants a bit of spike but isn’t too strong in character. 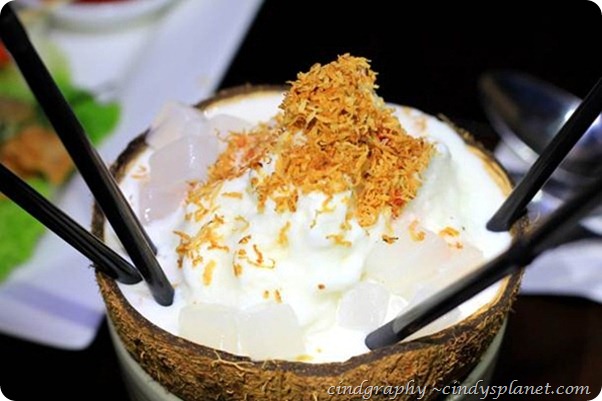 Back to chemistry lesson, the bartender concocted this “Mixed Chemistry” which is a blend of vodka raspberry, fresh lime juice, pineapple juice, apple juice and falernum syrup. The fruity mixture had certainly interesting mixed to it, given the variation of fruit juices and a dash of sourness to balance the overall taste while drawn the intended taste. 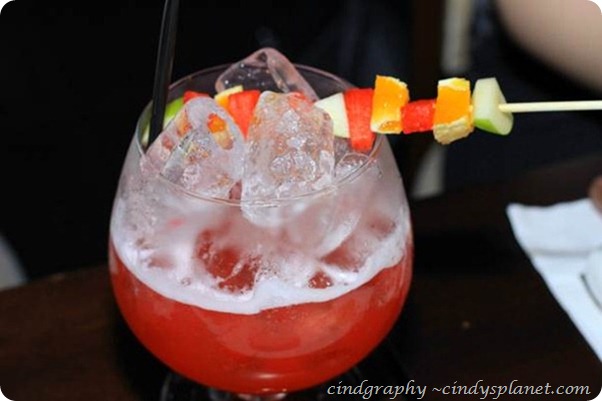 The extensive food menu of The Moon Bar showcases a variety of local favourites would certainly appeal to many who love such dishes to go with their drinks whilst dining in a pleasant environment instead of sweating it out the side stands. Definitely a great concept to incorporate all those under one roof in one menu. Dubbed as the Gastro Pub, The Moon Bar is definitely a place to dine and unwind for casual evening / night out. 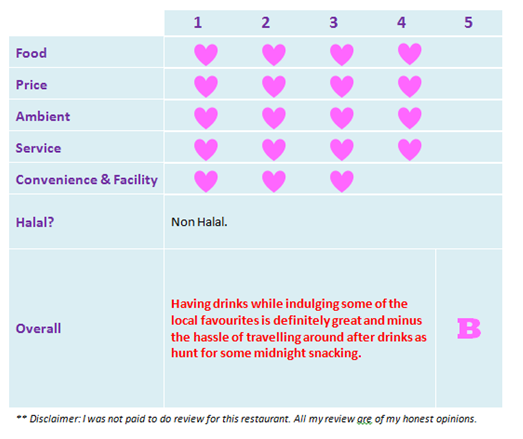 Chosungah 22 is in Malaysia + Quick Review