After a long week of work, many would look forward to some R&R (Rest and Relax) towards the weekend and if there is any strength left from the day, it’s hitting the bars or pubs for some boos. As for us, we head over to a new joint called “Cuppa Kaffe”, thanks to Foodirector whom had invited us to join on this dining experience.

Situated adjacent to Asia Café @ SS15, Cuppa Kaffe has positioned itself into the centre of the surrounding with colleges. The fundamental concept gives emphasis towards comfort for a casual hangout to dining without sacrificing other aspect which is great. 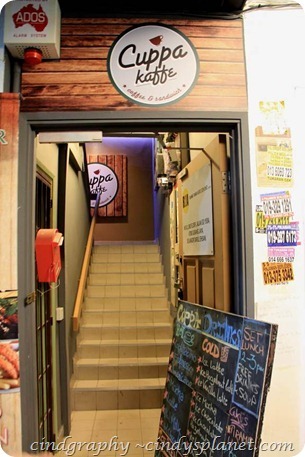 The steps towards Cuppa

Upon reaching the top (It’s at 1st floor and hence would have to work those legs heading up), patrons would be greeted with the selection of display on some delights for sweet tooth and some cuppa with ‘Segafredo’ coffee. 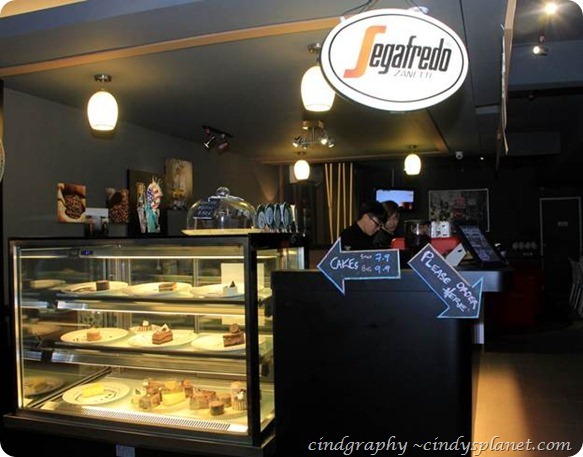 The simplicity on the designs blends in with the idea of comfort while maximizing the area that makes this lounge a great spot to hangout. 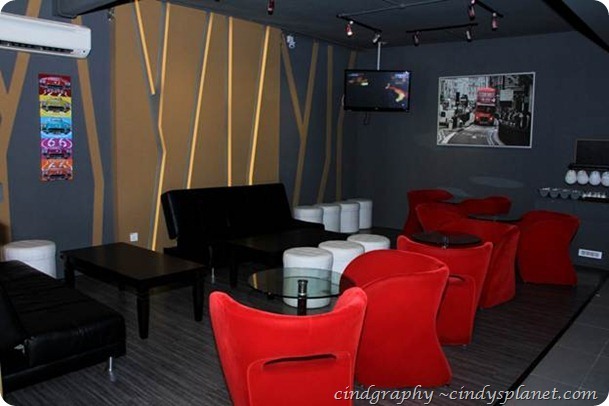 They had also portioned the open air for those whom prefer the fresh air while enjoying the lively views that goes around the surroundings. 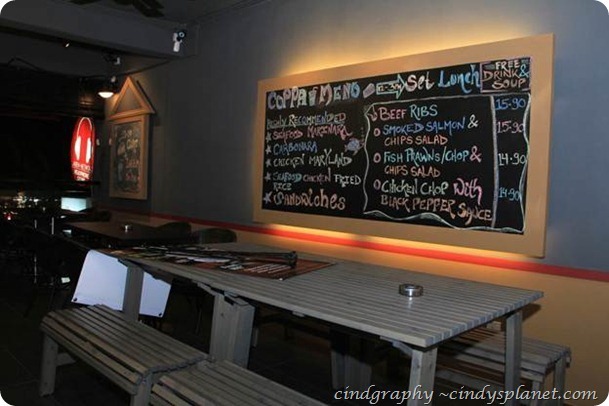 So without further ado, we shall get to the entrée prior to mains and give the taste buds something to decipher while ingesting the servings.

First up we have the ‘Mushroom Soup’. The mushroom soup’s aroma is noticeably strong which gives the anticipation of the taste higher. The slight hint of pepper and the herbs could be tasted however it was leaning towards the bland side and quite watery as it might be watered down slightly, given the texture and the taste. 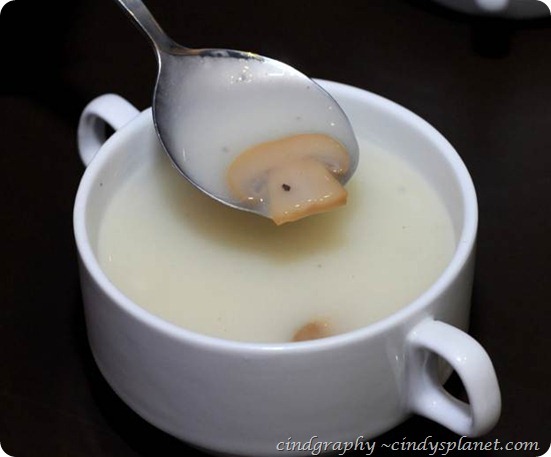 Next up we have the ‘Seafood Carbonara’. The sight of the seafood would entice many, given its fresh appearance. The creamy sauce texture is great as it wasn’t too creamy but towards the lighter side which balances with the herbs and garlic along with the seafood. The slight hint of pepper gives it the slight spicy taste that infused well along with the other ingredients. 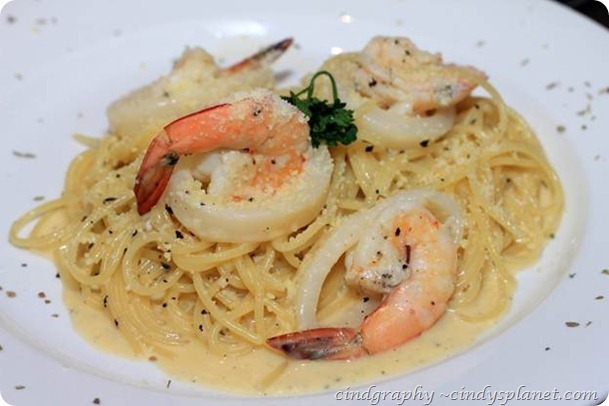 The following we have is the ‘Beef Bacon Carbonara’. The bacon is tender and goes well along with each bite. The sauce is similar to the prior serving of the carbonara however this is slightly thicker but we prefer the seafood. 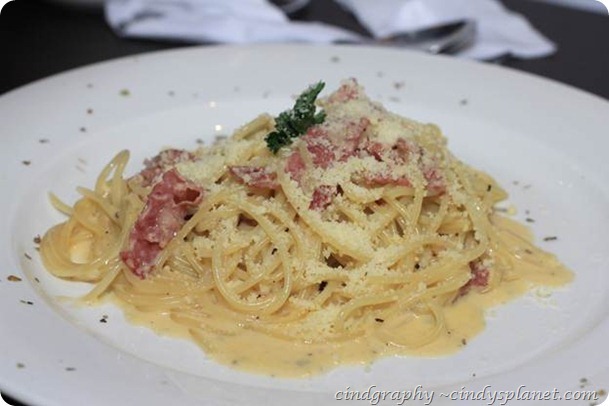 We have another carbonara which is the ‘Chicken Carbonara’. While the pasta and the sauce is alright, the chicken didn’t appealed to us as it was bland which is prolly due to lack on seasoning and the fillet tasted as though brought out from the chiller frozen, straight to cook after taste. 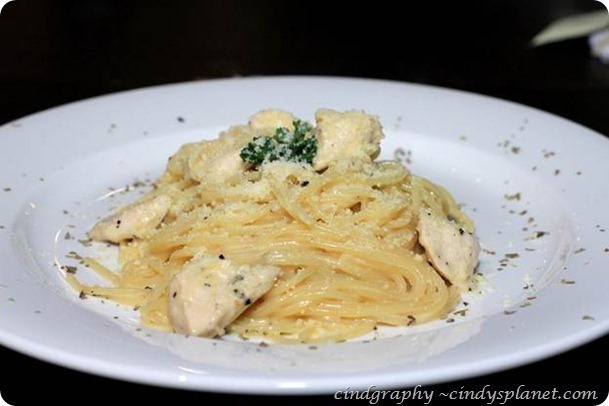 Serving next is the ‘Seafood Marinara’. The taste didn’t really appeal to us as tomato paste has a hint of oyster sauce which caused the flavour differ from the usual marinara sauce that should be slight sour taste. However the seafood is great as it looks and taste fresh. 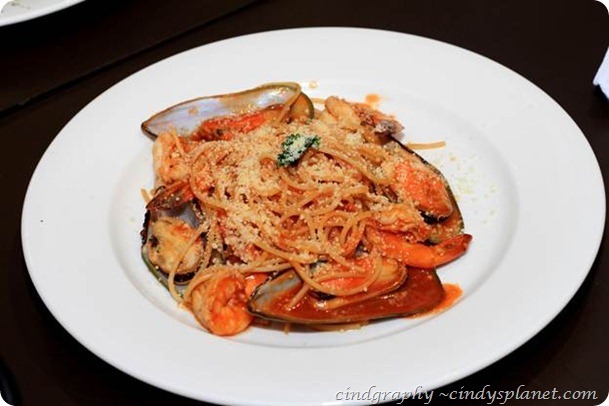 Coming in hot is the ‘Pepperocino Spaghetti’. Though pasta isn’t on our favourite list but this is definitely favourable. The spiciness lingers in the mouth that gives a strong aroma which is great for indulgence. The pasta is al dente though there is residue taste of plastic (or maybe we could be wrong) which is gave the flavour slightly off than intended with the garlic and herb garnish. The next serving is something meaty, ‘Chicken Chop’. The texture of the chop is quite tender and while there is this brown sauce on the top which is really bland. The brown sauce made a slight effort to bring out the flavour as there is more room for improvement. The onion ring was normal, given its batter is slightly too thick and the salad didn’t fare well as the ratio on the ingredients are not balanced accordingly which could use more mayo dressing and that is partially why we didn’t clear it up. 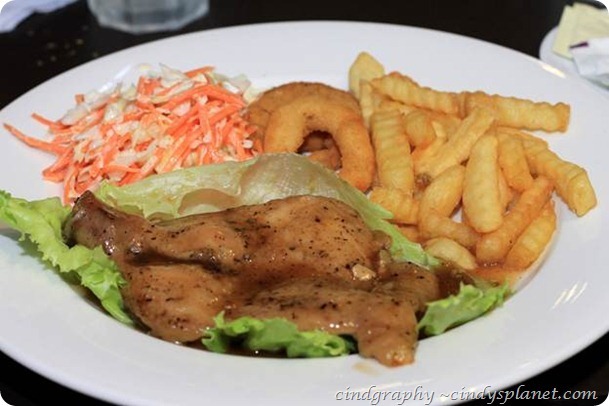 Next is the “Chicken Maryland’. The fried battered chicken has more flavour than the chicken chop however the texture is not as tender as the chicken chop. It’s rather dry as the moisture had slipped out due to the deep frying. 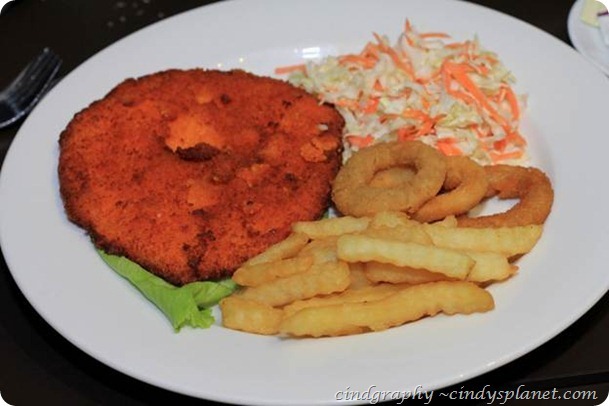 While the serving comes with their in house made sauce, Black pepper and Brown sauce, the chicken could use a bit more seasoning without the reliance of additional sauces to further enhance its flavour. 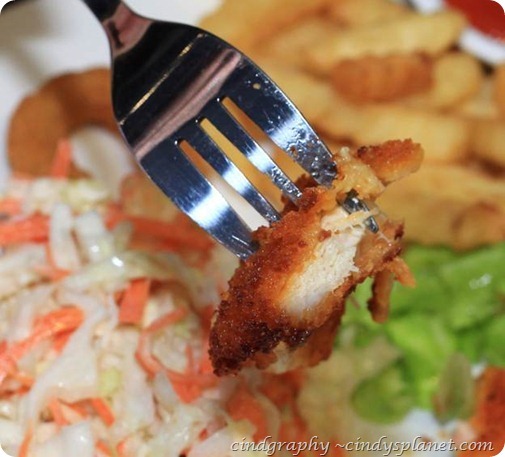 After a lengthy meaty chomping, we head on next to something light which is the ‘Grilled Salmon’. The ground black pepper is doused on the top of the salmon slice which is then grilled onto the stove and the middle bone is removed prior to serving. The taste is rather off as some of its natural flavour had slipped out which leave a slight bland taste and the more evident taste is the grounded black pepper. 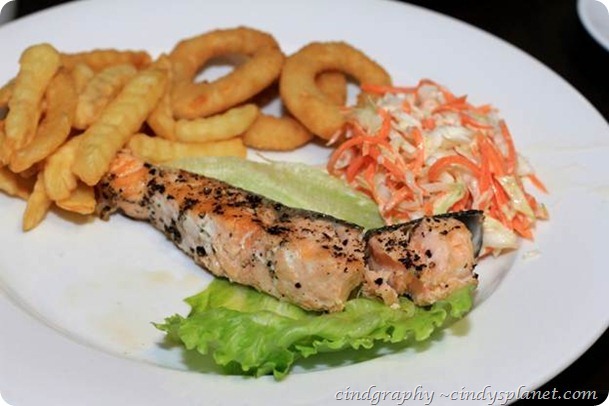 Following up is the ‘Chicken Chop Fried Rice’. The rice is tasty as the seasoning goes along with the diced spring onions which is tossed along with egg and stirred fried. Personally we think that if add some small dried shrimps would give it extra taste and reduce certain seasoning to avoid being too salty. The side chicken chop is normal as the texture is slightly hard which likely due to the moisture had dried up. 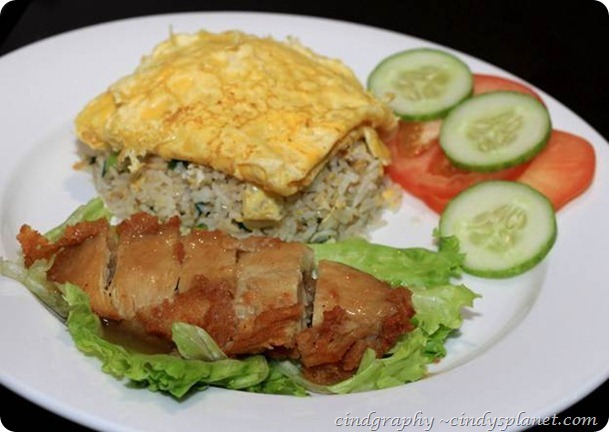 This ‘Honey Beef Rib’ is huge looking serving and the taste that compliments it though the marination could be longer to let the taste infused along with the rib. While said so, the rib is found to be overcooked as it was both hard to cut and chew afterwards. 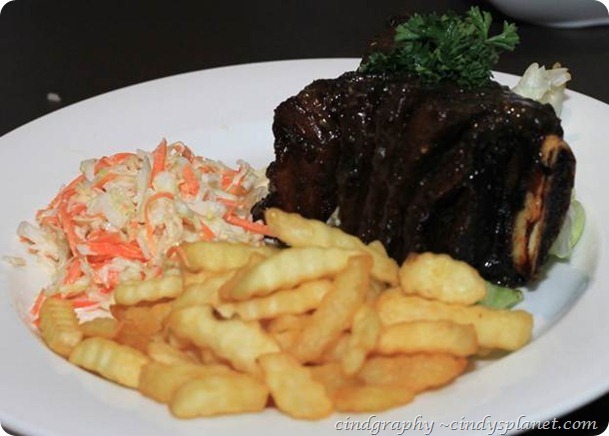 Even after a heavy meal, there is always room for dessert which we are about to indulge.

The ‘Hazelnut Truffle’ basis is the chocolate cake which is then topped with hazelnut mousse and filling. The blend in the mousse is balanced well while the filling tastes much similar to Ferrero Roche which came as a surprise. 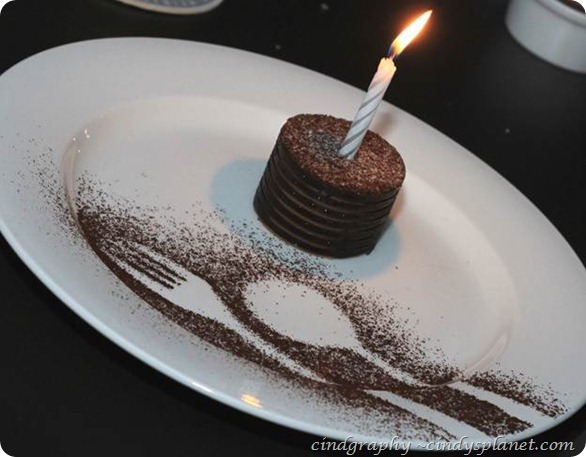 The base is the vanilla cake and topped with white chocolate mousse. This snowy white dessert had definitely enticed many taste buds alike as the texture is smooth and milky. It is also surprisingly not sweet. We had definitely fallen in love with it. 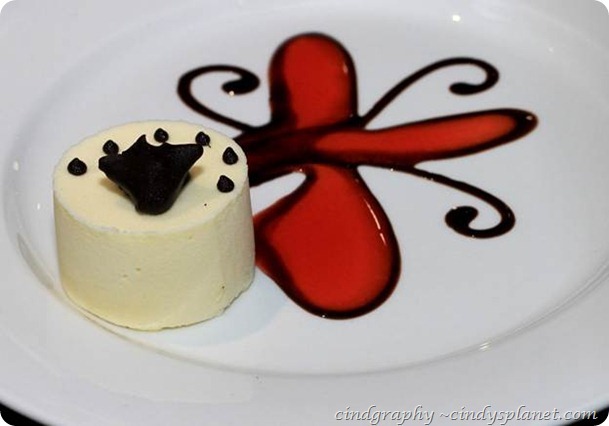 The ‘Classic Cappuccino’ (with white cream) is comprised of chocolate cake which is then topped with cappuccino mousse and crunchy chocolate pearls. It is not too sweet and the cream is quite light which makes it easy to ingest. We had definitely grown a sweet tooth for this. 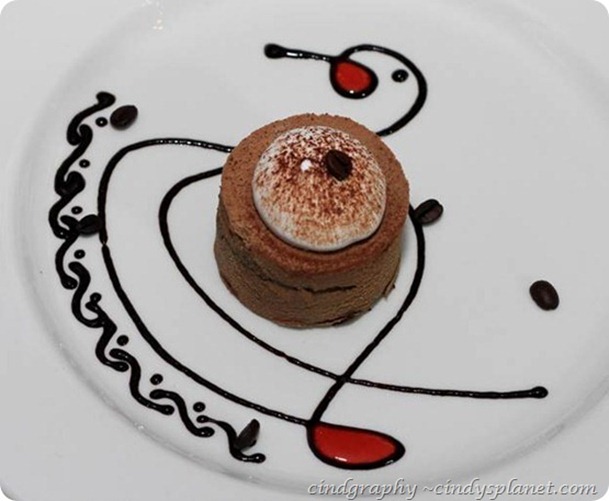 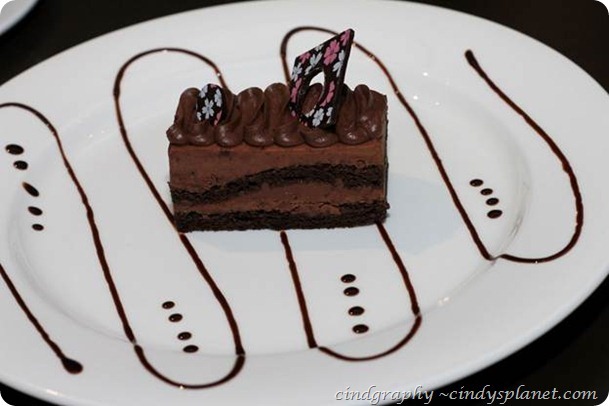 The ‘Caramel Coco Banana’ didn’t taste any banana though. However the evident creamy chocolate mousse that goes with every bite taste great. 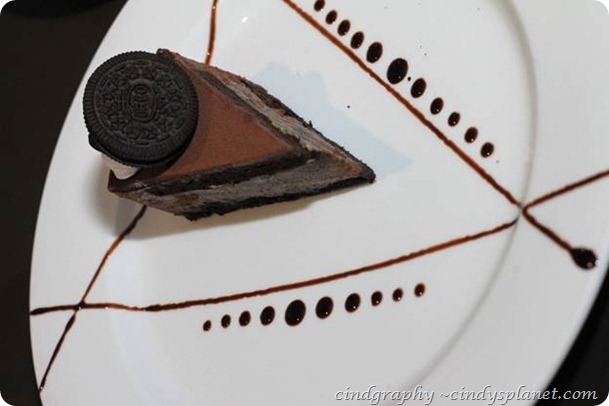 This ‘Cheese Cake’ tastes great and love the biscuit base as it’s crunchy and not soggy. However on the Cheese wise, it still lack of the cheesy ‘wow’ factor. 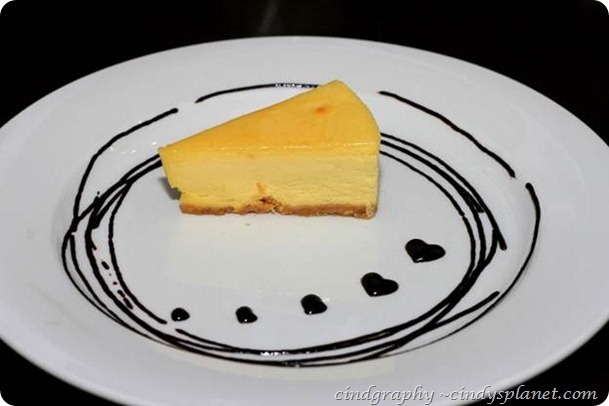 The ‘Tiramisu’ is comprised of moist sponge cake laced with coffee which is then layered with delicate mascarpone cheese. The taste is fared alright however we would prefer stronger coffee aroma in the sponge cake which is quite spongy and also prefer if the cheese texture could be tweak to follow the mousse type texture. 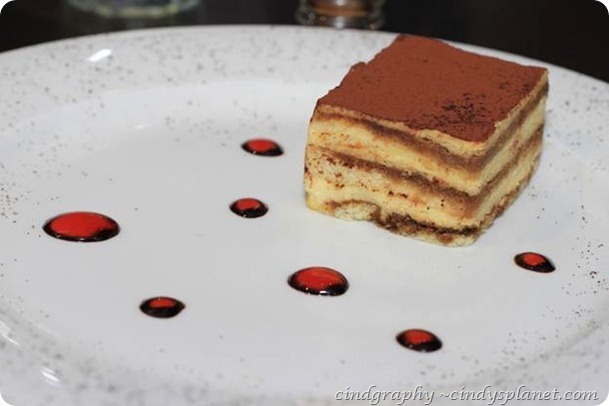 The cake price ranges from RM7.90 for a smaller slice to RM9.90 for bigger slice.

Aftermath of indulgence, it’s time to slow it down a notch to enjoy a cuppa of coffee.

The ‘Cappuccino’ is tastes normal as chocolate powder gives it the slight bitter coffee shot balance along with the milk. However the aroma is noticeably low and the milk froth isn’t smooth. 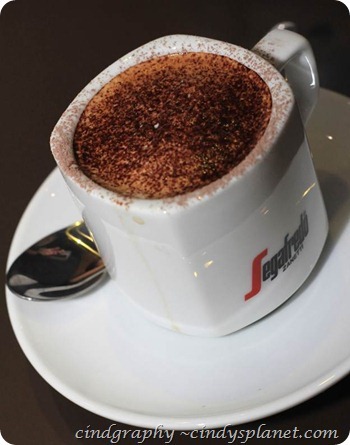 The latte had fallen on the bitter side as the coffee is plain bitter and there is not so much aroma which the milk wasn’t smooth. 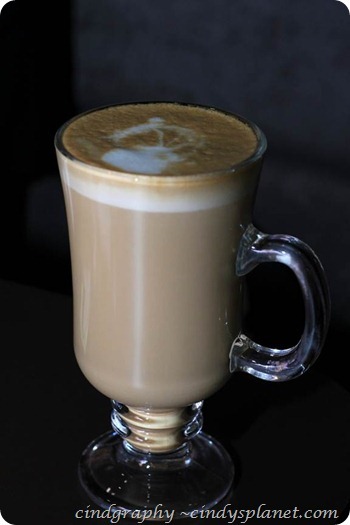 It was great evening and bundled with some great food indulgence. Special thanks to Foodirector for organizing this hangout and Cuppa Kaffe for graciously having us for the evening. 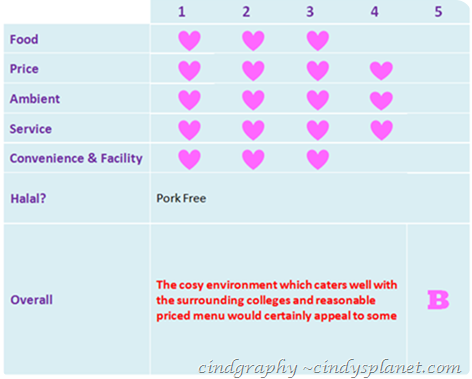 EVOLU, New Zealand is in Town!

Everything You Need to Know About Acne