Last week, we head to another burger joint which is called Big Hug Burger that had opened recently. Thanks to Foodirector, we shall explore the variant burgers that they’ll be serving right off the menu. So let’s see what my take on these warm burgers! 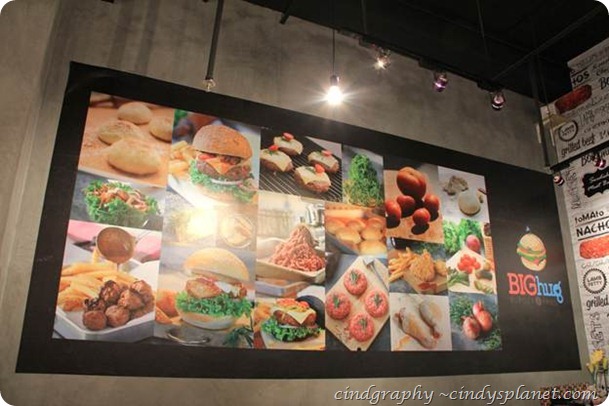 Situated in the middle of the Subang Square Corporate Tower and within the vicinity of the Taylor campus, it’s definitely a great spot to get the crowd especially the students around for lunch or just a quick bite.  However, it’s a little tricky to locate Big Hug because the restaurant is actually hidden and all you can see is small signage pointing Big Burger Hug is located inside the building! You need to look for the signage on the top on your left hand side (Forget to snap a picture)!

From the entrance, many would be intrigue by its fundamental concept of youthful art that would inspire some quick pic with various angles on creativity. 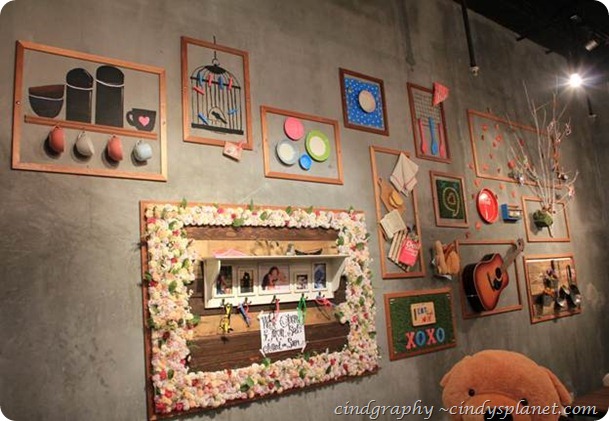 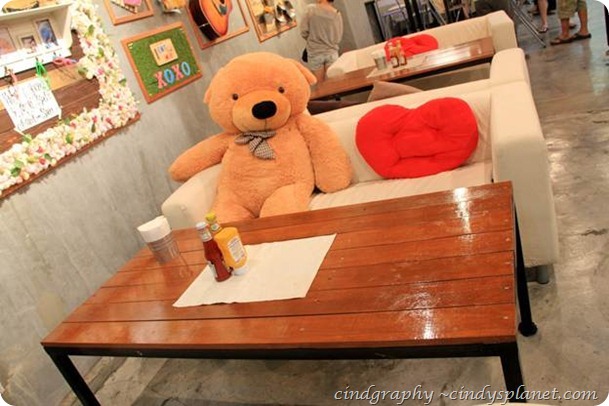 The Bear, The Heart, and The Camera

Ok maybe a lil something got into Thomas as he poses with the huggie bear. Big Hug Burger ensure the teddy bear as well as sofa is washed every week. So they are safe to be hug!!! 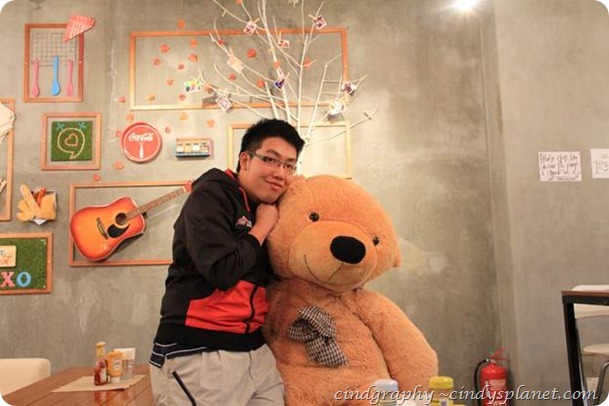 Great emphasis was given on the importance for fresh ingredients which naturally for most establishments to offer only the fresh for patrons that would be the strong returning point in a visit. So let’s go grab a bite. 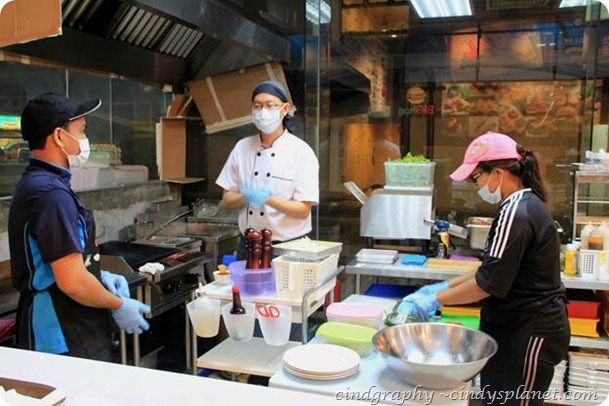 Before we can actually grab a bite, we will have to wait for the peeps from the kitchen to cook up a storm of burgers to chew. So while we await the serving of the burgers, the entrée was served and first up is the onion rings. The onion rings batter is crunchy on the outside and the onion is sweet. The sauce tastes like the combination of mayonnaise with chilli sauce, not my favourite though. However it is slightly greasy inside which the deep frying might have contributed to such but I still think they taste good compared to few other burger chain! 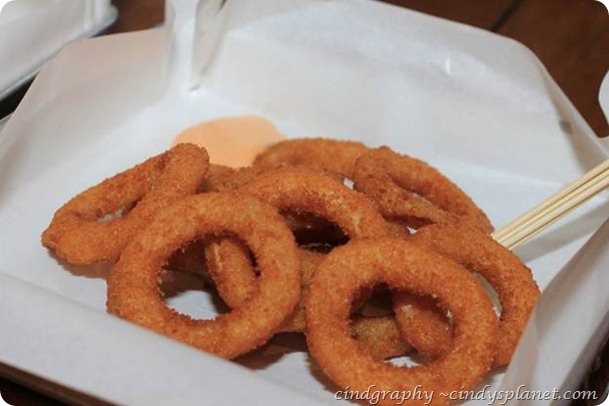 Next up, we’re getting some pretty bright looking serving of wedges. The Chessy Wedges which incites appetite of some as the wedges didn’t have the after frozen thawed taste and the frying made the exterior crispy but the chessy sauce lack of lustre that would stand out. 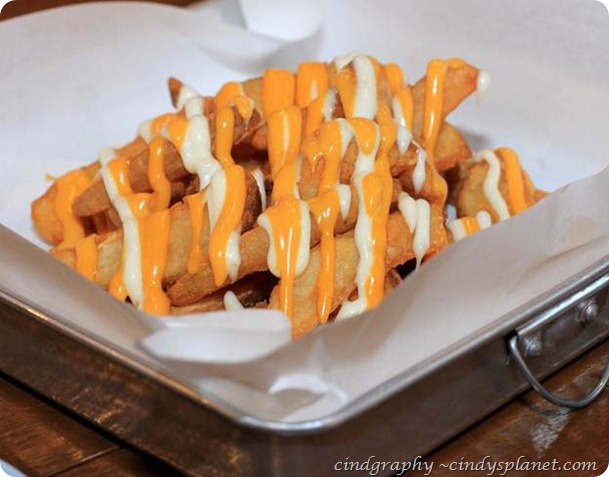 Hey Luigi, Where’s Mario? Oh yea. Guessed it right, we’re having the Mario, Mario Beef Burger. Well it wasn’t red blue in colour literally. The namesake is derived from its shitake mushroom topping with its beef patty along with the vegetable salad. On a first glance, it is very enticing due to its smouldering cheese on top with the cheesy sauce. The beef patty wasn’t that juicy as the moisture had slipped away and the shitake mushroom taste didn’t really appeal to me as it doesn’t blend along with the burger overall flavour. The salad is hard to chew off though. Aidelle, the owner said they use fresh organic salad which is called Leaf Lettuce. I am not sure the type of salad leaf other Burger chain is using but Burger Junkyard, My Burger Lab, Smashie Burger & Go Burger Kitchen ones are quite chewable. The onion was slightly greasy and hard. I doesn’t like the onion and I did not ate it cause I’m not a onion fan so if it is not properly caramelized I have hard time eating them! However the oatmeal bun had compliment the burger. 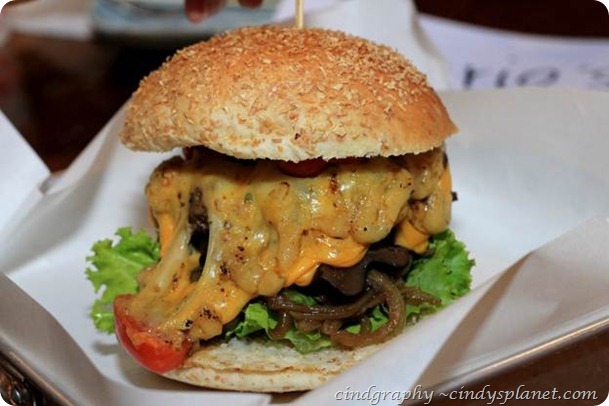 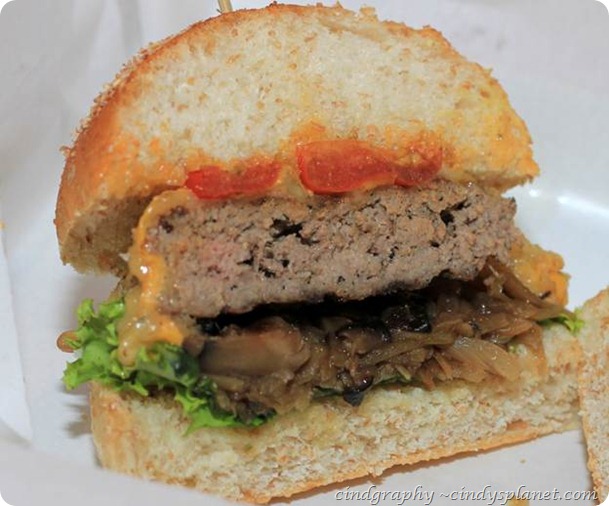 Following on the menu, we have the Grilled Beef. The patty is found to be juicier than the Mario beef, but not as juicy as I like it to be and the topping is somehow similar to the former except the shitake is taken out. The cheese and sauce taste normal along with the charcoal bun. 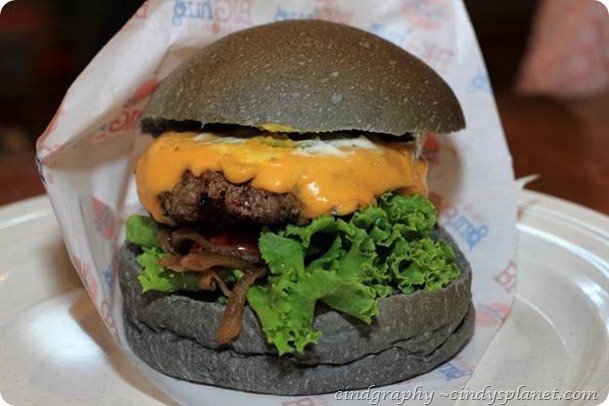 Next up we have the Grilled Lamb. Perhaps they marinated it well enough to envelope the lamb taste as unable to capture the taste of it and leaned more towards a cheese burger. The additional pickles mayo dressing along the cheese gave a unique flavour but might not be appealing to some. 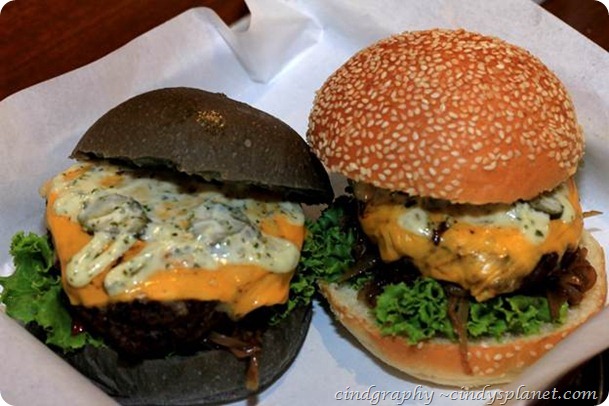 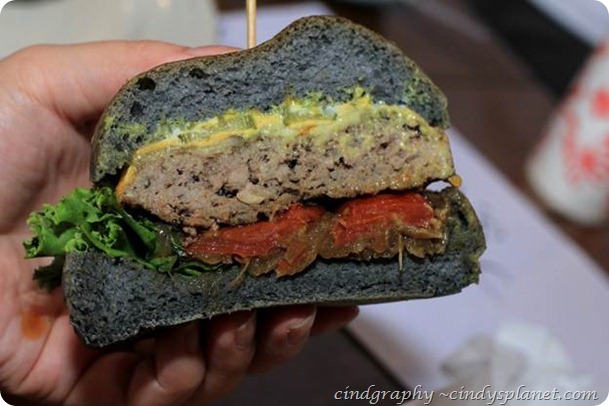 After a straight set of grills, the kitchen is preparing another set of burgers for serving which requires a bit longer time. Meanwhile they have laid out some sauce which is made in house and the variant sauce is pretty interesting as there is something for everybody’s preference. 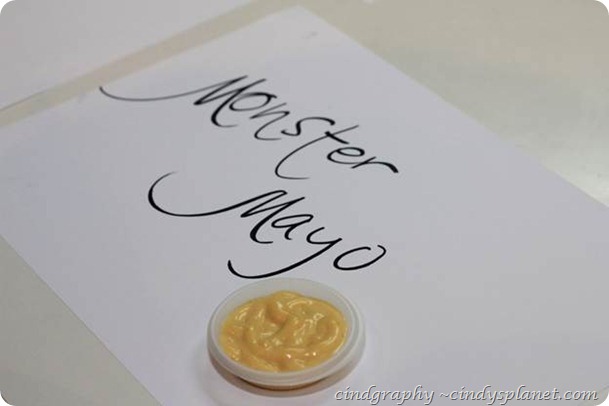 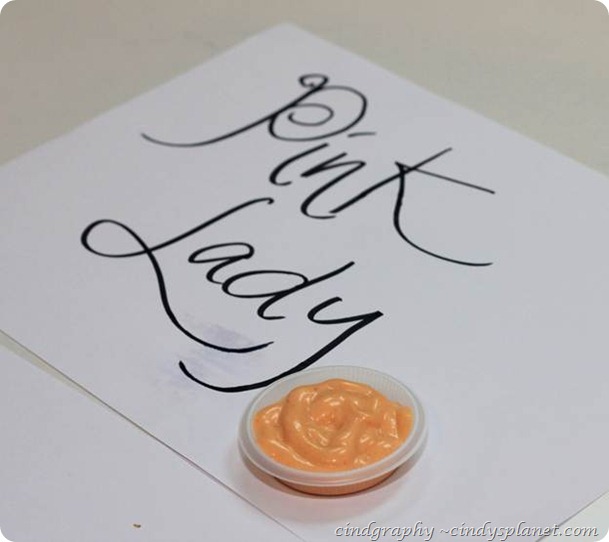 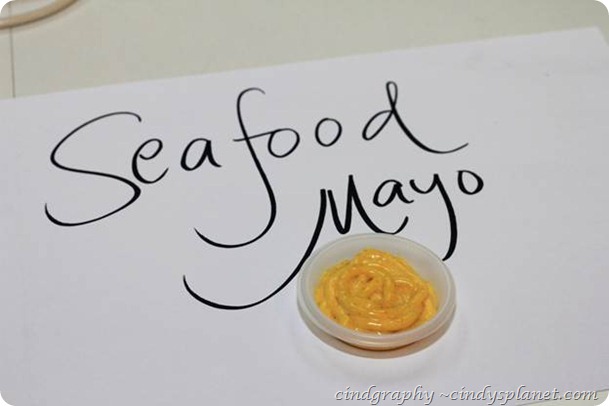 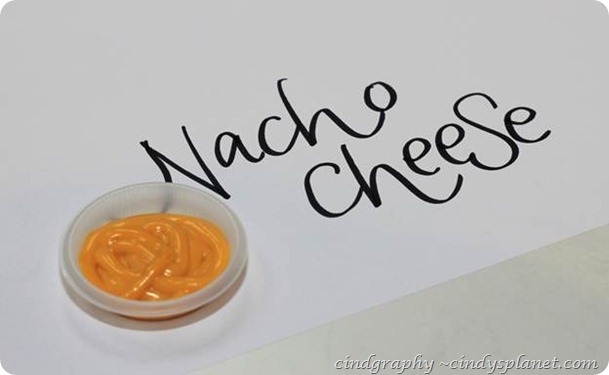 I prefer their mint mayo which the mint leaf blends well with the mayonnaise that gives the minty taste if dipped with the fries. The fries seasoned with the herbs didn’t agree with my appetite as it wasn’t oily or anything but it felt too dry to go down the chute which is surprising. Here comes the boom, the Big Hug Burger which is a sight for to behold. The size on this burger could sent diet plans come crashing down like a house of cards and fills the gaps in the tummy in a jiffy. The spice that they use to fry the chicken patty is definitely favourable. The batter is doused lightly to give outer crust crispy and while its deep fried, it wasn’t too oily. However the slight setback would be the pineapple which wasn’t really chunky and chewy though. 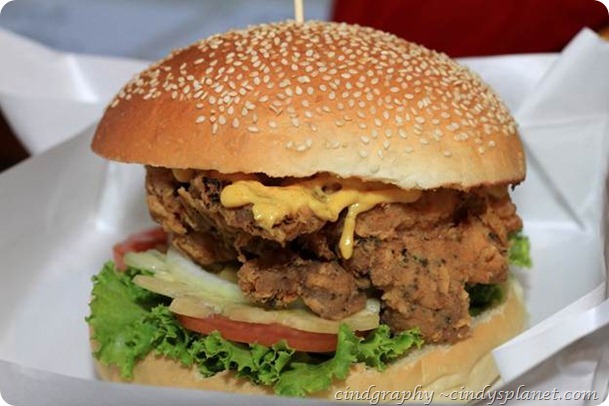 Serving next up is the Cheesy Chicken. The burger is served along with sunny side egg topping, a slice of chicken ham, cheese sauce dressing, tomatoes slices and chopped onions. The chicken fillet is marinated differently from Big Hug’s chicken fillet as given the taste, we prefer the Big Hug Burger which would be great if they add the sunny side onto the Big Hug. The middle of the fillet is with the chicken meat however given the batter isn’t spread out evenly, the corners of the patty is all batter which taste very much like Zinger Burger but zinger better, even though the fillet is using the thigh portion which is deboned and texture is supposedly tender. We felt rather dry and does like the taste of it! 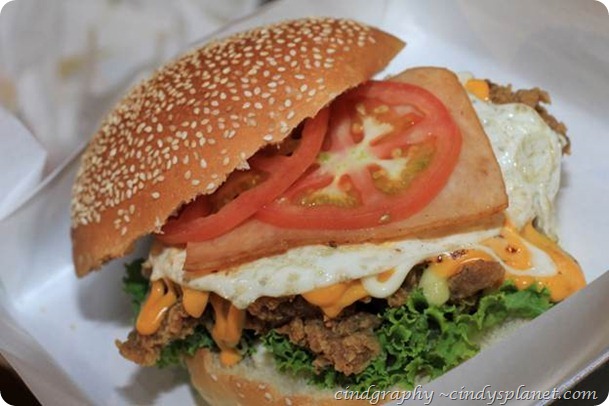 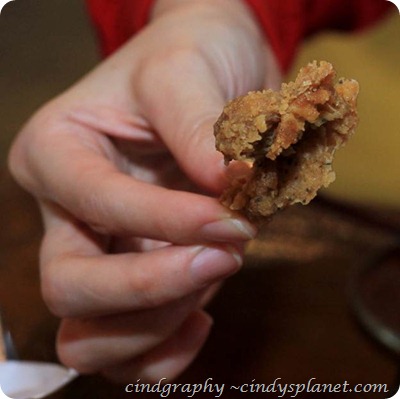 Cheesy Chicken (The corner of the patty)

Continuing on, we were served the Crispy Fish. After all the meat serving, It is great to go a lighter side of the meal. The patty texture can be seen fresh and flaky. It was mentioned that they use the premium grade of the dory fillet for the patty which we enjoyed it. The topping which comprises of the tomato slices, lettuce and with a dash of mayonnaise taste great. 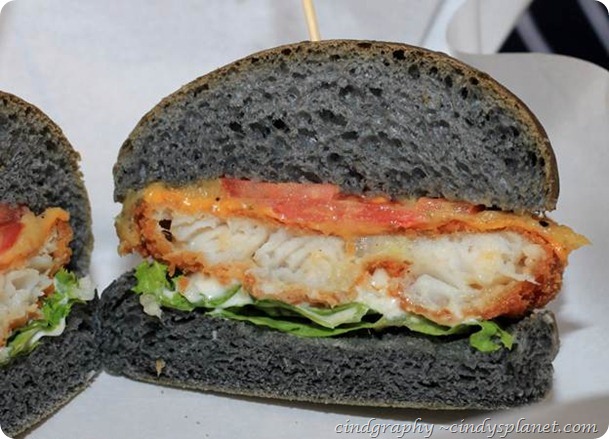 The next up is the Grilled Salmon. We were surprised on how the salmon had actually turned out as the ‘Grilled Salmon’ had lost its tender and soft texture to the grill which in turn reduced the fresh salmon taste and the salt seasoning could be tasted. It might better if they had pan fried it to properly seared in both the moisture and taste while retaining its moist texture. 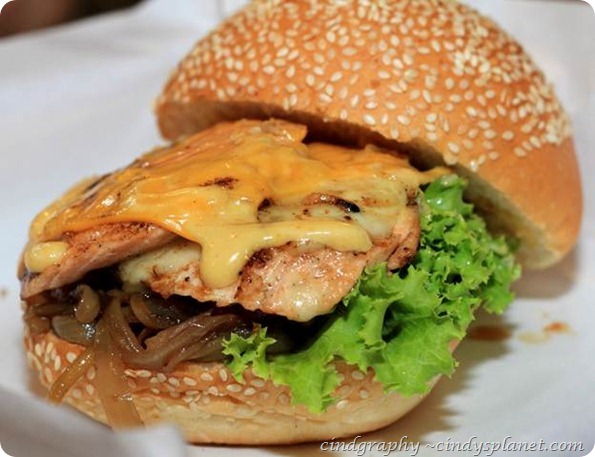 The next burger was the Honolulu Chicken which was alright while the topping is normal, however the dash of the tomato sauce tastes like bolognaises sauce. The bun was rather thick. We weren’t a big fan of it though. 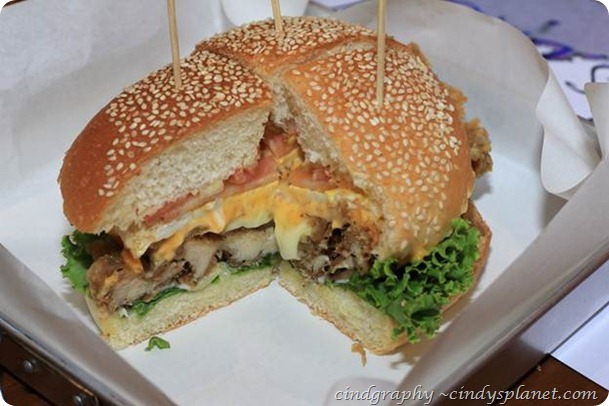 While we were on burgers, they had served us their in house handmade Meatball. Given the meatball is handmade, thus the size is not consistent. They use the top portion of the beef shoulder as it is lean and not too fat. The meatball is tasty with topping of their very own gravy which is smooth to go along with the meatballs. However, the texture wasn’t tangy and traces of flour can be tasted along with the meat where there is a small piece of soft bone meat as well. 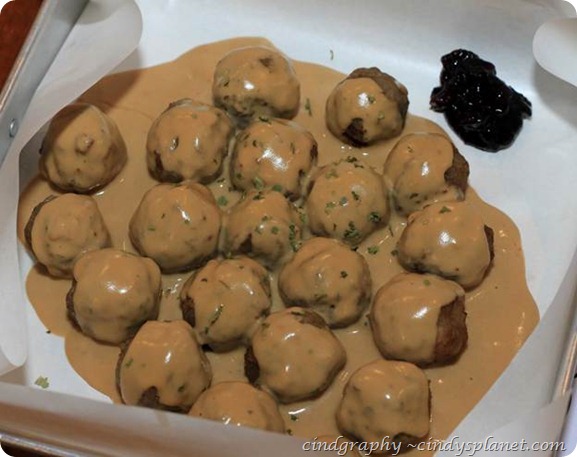 In overall, the burgers are generally acceptable and there is definitely room for improvement. The onions that they generally use on the toppings didn’t appeal to me as it wasn’t caramelized and rather greasy. I prefer the crispy fish and Big Hug burger the most while other beef and lamb burger are still lacking the juiciness! 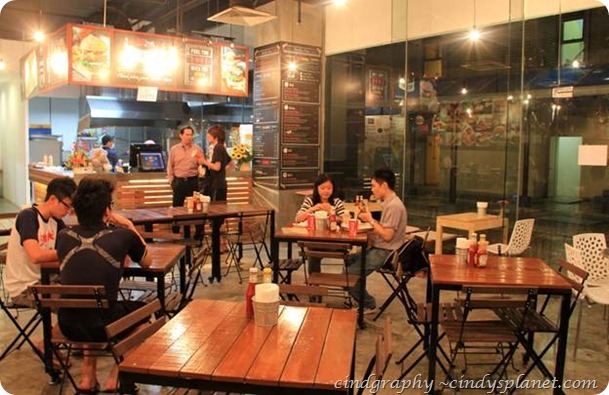 Perhaps the set up was generally for a quick bite or just a quick chatter as the chairs are quite unpleasant due to it being hard but guessing the sofa is great for social or casual sit around. They had also mentioned that the fries is dry because they don’t use recycle oil which sticks to the fries and while using new oil is much more healthy as the oil would just surround the fries instead of sticking onto it, the taste would be generally dry and slightly bland as to compare with others. Some of the attendees that night like it though as it is not oily….

All the buns during service are made in house. 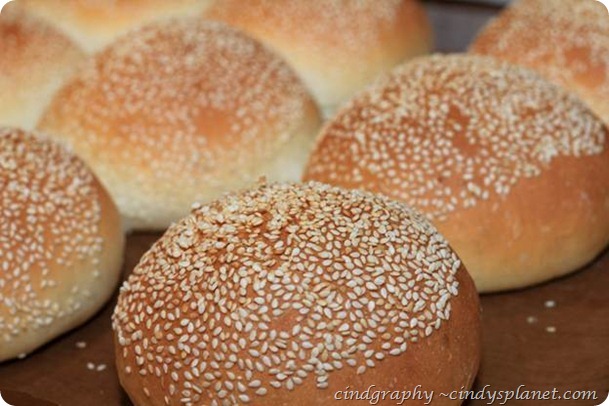 The overall outlook looks appealing to most, given it light contrast and bright hue on its décor. 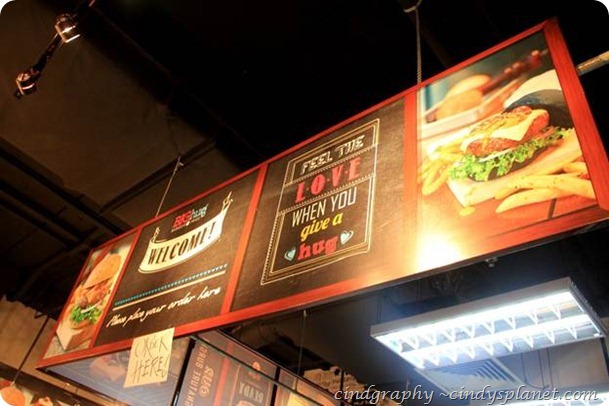 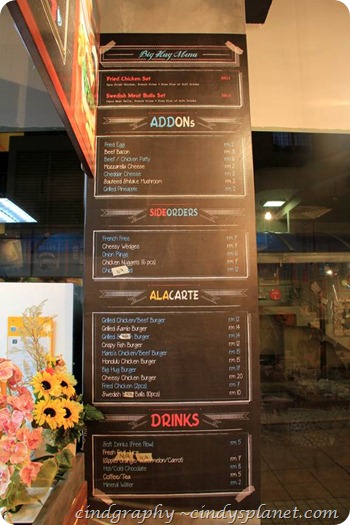 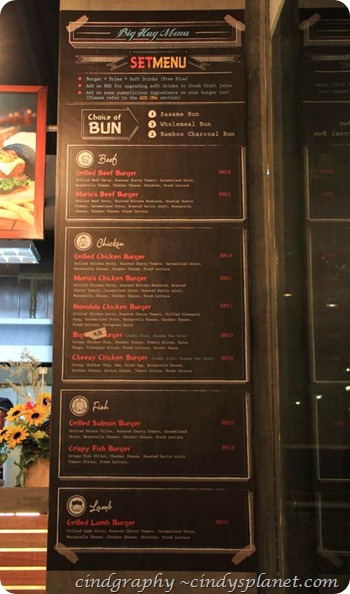 The Menu (other side)

The extensive burger menu had definitely made the tummy rolling. They also serve coffee, tea and milo which it feels very much at home. In terms of the ingredients, it is implied that they use the fresh ingredients and the food is prepared throughout the day till late. Another emphasis is the wastage, if there are extra buns, or leaf lettuce, it will be sent to the orphanage.

Special thanks to Foodirector for organizing this and we are gracious to have Big Hug Burger hosting us for the evening. 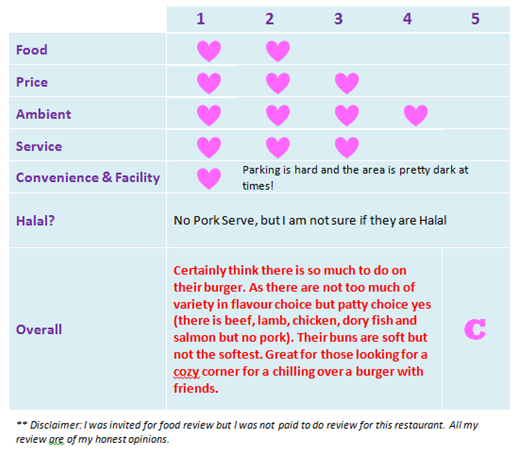 How to Hunt Northern Lights in Iceland