This week pick as the title suggest, it’s Frankenweenie. It’s a modern twist on stop motion animation adaptation of the classical horror tale of Frakenstein directed by the Tim Burton whose work is renowned by the likes of Batman, Sleepy Hollow and much more. Talk about imagining it all over again and trying to outdo what many had tried but with the help of modern day technology for perfect rendering of smooth texture and complexion in the movie, you pretty much get the idea. 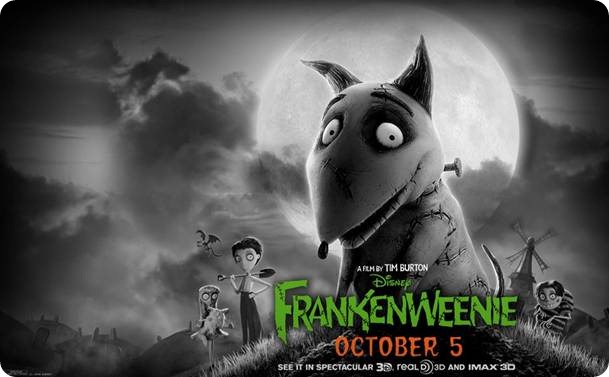 [MAJOR SPOILER !!] It’s in black and white. Read on with caution.. HAHAHA 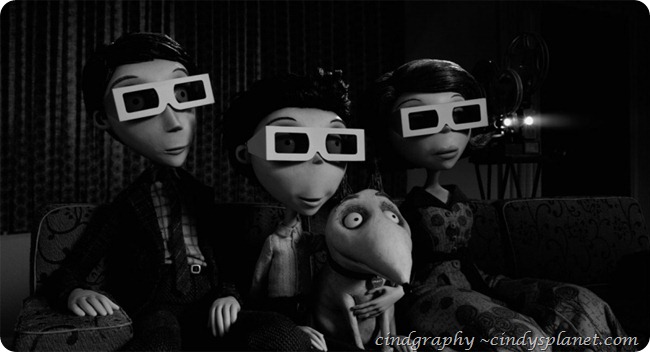 The movie starts in the all seemingly normal household, loving parents, beautiful house and a loyal pet dog which named Sparky while watching movie with 3D glasses. Well normal doesn’t quite cut it in this household when they’re named the “Frankenstein” (Coincident? Guess not.) And the filial son named Victor (See the resemblance??). Victor is a bright kid whose passion lies in the field of science and has a nick of saying can fix it.

His parents are pretty concerned over his seclusion from the outside world and encourages him to go out play like any regular kid at his age. Meeting along is the neighbour who happens to be the Mayor named Bergermeister (I could see where this was going) who has some anger management issue especially towards Victor’s dog, Sparky. Reason? Special plant, flamingo bird display, blah blah blah as dogs goes running around and wrecking all those during its path of demolition. It’s just a dog.

Anyway, he had a niece whose staying in that goes by the name of Elsa Van Helsing (What’s next?) whose companion is also a pet dog named Persephone (Oh boy..) The scene quickly shifts to the school where all that was spoken came in character. Creepy hunchbacked kid named Edgar Gore (Egorrr??) and a science teacher that perhaps resemble Albert Einstein but he’s Russian named Rzykruski.

Its All in the Elementary, lads… 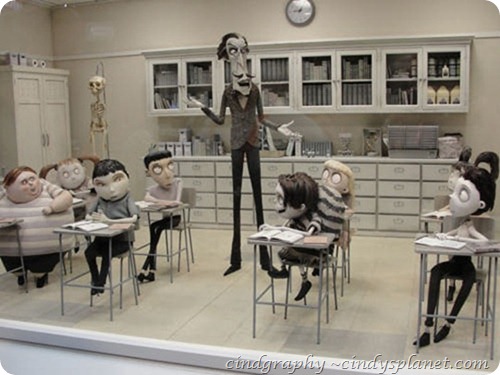 Soon after tragedy struck and Victor was left grieving over his beloved pet, Sparky. Remembering what he had learned from the science class about electricity and the human nerve network, he quickly made a make shift laboratory in hopes to revive Sparky.

With much daily household items from the frying pan to the bicycle, the experiment went ahead in one stormy night of lightning and thunder. One lightning eventually hits the make shift lightning rod which then strikes Sparky and the look alike tesla coils. It wasn’t until later he had actually successfully brought Sparky back to life. Reanimate in another terms. Fearing what the townsfolk and his parent would think, he tried to keep it a secret but it wasn’t long before the secret was discovered by Edgar and soon the whole classroom bunch that all had tried to emulate Victor’s reanimation process for the upcoming science fair. Blurred by right and wrong, those kid’s experiment could very well cost them dearly. 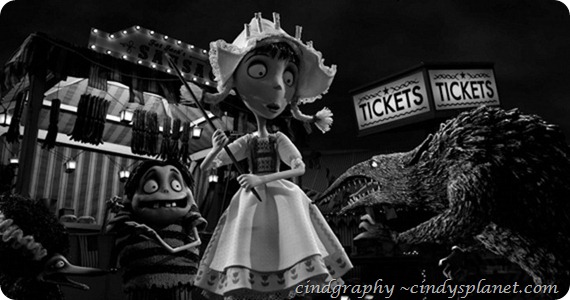 The movie in overall had my attention from the beginning till the credits rolled. It wasn’t just some random horror reimagined and there were some element that is retained from the original classic. There was a special tribute for the author that had initially written in novel and it had come so far. It’s a definite must watch for the whole family on Halloween week. So catch the movie in the nearest cinema near you.

Veet it Off with Nuffnang: Imma Flaunt My Silky Smooth Skin with Confidence!

What Does (And Can) Travelling Mean To You?

How to Plan an American Road Trip

5 Tips to staying fit during the holidays